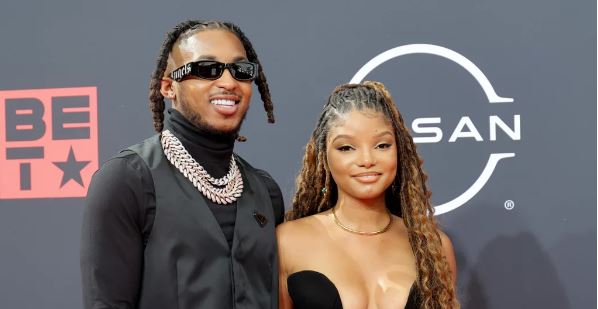 Halle Bailey, one half of the iconic R&B music duo Chloe x Halle, has been making a name for herself after snagging her coveted role of Ariel in Disney’s upcoming live-action remake of “The Little Mermaid”. She’s also gearing up to star in “The Color Purple” musical movie alongside folks like Ciara, H.E.R., and Taraji P. Henson.

The singer has been active in the entertainment world ever since Beyoncé signed her and her sister, Chlöe, to her Parkwood Entertainment record label. After recording two albums — 2018’s “The Kids Are Alright” and 2020’s “Ungodly Hour” — and snagging multiple Grammy awards with Chlöe, you’d think that’d be enough for fans to know about Halle. But curious minds are still wondering if the talented singer has a special someone in her life.

Darryl Dwayne Granberry Jr., known professionally as PontiacMadeDDG or simply DDG, is an American rapper, singer, and YouTuber. He started making videos in 2014, after graduating high school in 2015 DDG expanded his content with YouTube vlogs while attending Central Michigan University.

Lately, the duo has been linked together romantically; flaunting each other on their social media platforms, revealing positive things about their lives, and wishing each other well on their birthday, during projects, and in a whole lot of loved-up situations. But, how did DDG and Halle Bailey meet, and are they still together, also, who did each date before they came together?

How Did DDG and Halle Bailey Meet?

Bailey and DDG have been dating since January 2022 (9 months now) and made their glamorous red carpet debut as a couple at the BET Awards on June 26, but the pair have been dating for quite some time now. Romance rumors first began swirling when they were spotted together at an Usher concert in January 2022.

A video obtained by “The Shade Room” showed her and DDG sitting close together enjoying the concert. At one point, Bailey even turns to DDG laughing over something Usher did on stage. Usher posted pictures on his Instagram story of the pair together backstage after the concert ended, tagging their Instagram handles in the post. Two months later on March 27, they went Instagram official.

Since then, the couple has only had good things to say about each other. “She honestly motivated me to be better and work harder and get to certain levels,” DDG said of his girlfriend in a July 5 interview with DJ Akademiks.

DDG confirmed his rumored romance with Bailey in an Instagram post wishing her a happy birthday. “Happy Birthday to the beautifulest, the flyest, the sweetest ❤️ love you forever,” he wrote in a caption, alongside a series of their selfies and a video of him putting an iced-out chain on the singer.

Bailey’s new boyfriend, like her, has been involved in the music industry for some time now. In 2014, DDG launched his YouTube channel and started making music shortly after. Alongside the success of his YouTube, which now has 2.66 million subscribers, DDG released his first studio album, “Valedictorian,” in 2019. His 2020 single, “Moonwalking in Calabasas,” spent 11 weeks on the Billboard Hot 100, peaking at No. 81. The song went platinum in June 2021.

“As much as people think I’m so confident, 80 percent of the time I feel the complete opposite of that,” Chloe admitted in the duo’s interview.

Sisters and musical collaborators Chloe and Halle Bailey have been spending most of their time working on solo projects as of late, but for the upcoming issue of Essence magazine, the duo came together for a beautifully styled photo shoot and interview about where their lives are at right now.

Of course, interviewers couldn’t help but prod the younger sibling about her romantic relationship with DDG, which first caught the media’s attention earlier this year as they attended an Usher concert in Las Vegas together.

“I grew up being on YouTube and would always see the young Black creators and was constantly inspired by them. He was one of them,” the 22-year-old told the publication of how she met her match, adding that she “completely forgot about him” afterward.

“But then I saw that he was dropping music, and I really gravitated toward this one song. Coincidentally he messaged me — and the rest is history.”

Halle made it clear that when it comes to her loved ones, she’ll go to any length to protect them. “If you’ve got a problem with so-and-so, then we’ve got a problem,” she shared. “I’m a fire sign… If I love you and somebody crosses you, it’s over. That’s been my stance since I was young.”

For her part, 24-year-old Chloe Bailey opened up about her self-love journey. “As much as people think I’m so confident, 80 percent of the time I feel the complete opposite of that,” the “Have Mercy” singer admitted. “That’s why I put so much of myself into my music.”

“That’s where I feel like myself and where I belong in this life — whenever I’m onstage. The girl I see and I watch sing back, she intimidates me. I’m like, ‘Who the hell is that?”

Elsewhere, the Atlanta-born starlet dished on her upcoming self-titled debut solo album. “It’s everything that I’ve been going through, all the tearing down, people underestimating, telling me I can’t do it — all of those things have gone into the music,” Chloe revealed.

From posting cute snaps of each other on social media to Bailey giving DDG singing lessons on TikTok, read more about the couple’s relationship timeline ahead.

Though Beyoncé celebrated her 41st trip around the Sun earlier this month, it wasn’t until Saturday (September 10) evening that she welcomed some of the biggest names in the entertainment industry to a Bel Air mansion to “f*ck up the night” in honour of the mother of three’s birthday.

Nearly the entire Kardashian family was in attendance, with Kim flaunting her figure in a skin-tight red and black tiger striped jumpsuit, while Khloé shimmered in a sparkly ensemble. The latter’s baby daddy, Tristan Thompson was also in attendance, as was his good friend – and fellow Canadian – Drake.

Unsurprisingly, 22-year-old Halle Bailey received an invitation to the party (it only makes sense seeing as she and big sister Chlöe are signed to the superstar’s Parkwood Entertainment label), and she brought along her boyfriend DDG, who clearly understood the assignment with his outfit of the night.

Bailey is currently gearing up to star in the live-action “Little Mermaid,” which premieres in 2023. In an interview with ET at the BET Awards, Bailey spoke about seeing herself on screen as Ariel for the first time and said she “cried” when she saw clips. “I was like, ‘I don’t understand how this is happening! How this is even me?'” she shared. “It’s very overwhelming. I get really emotional just talking about it.” Meanwhile, DDG is gearing up to release his new album, “It’s Not Me It’s You,” on Sept. 16.

Who Has Halle Bailey Dated?

In regards to the dating world and romance, Bailey is generally private. The artist has not dated anyone publicly in the past. She did, however, speak candidly about her type of man in an Instagram live video with Chlöe. In the live stream, she said, “Number one, me and Chlöe don’t like the same kind of guys. She likes pretty boys.” On the other hand, Chlöe said Halle likes “a guy with some sort of confidence and swag,” to which Halle replies, “Doesn’t everyone though?!”

Who Has DDG Dated?