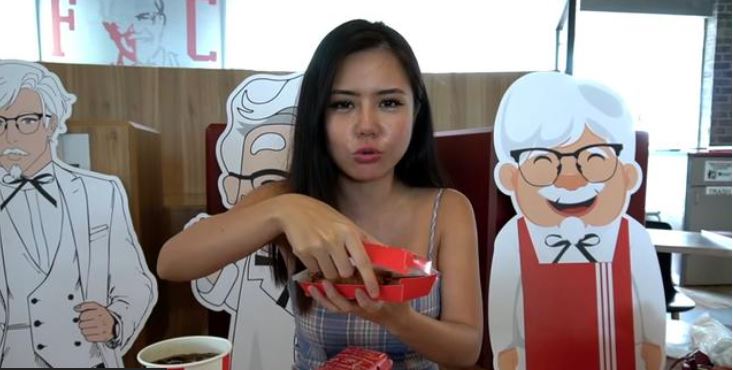 While talking on stream using a cucumber as a microphone, Cheng ‘Kiaraakitty’ Wing Yee casually roasted her fans by telling them how she ‘really’ views them.

But while discussing the state of her viewers on a broadcast on September 15, Kiraakitty let out some harsh words reflecting her brutally honest views.

The streamer has been under the watchful eye of the public on multiple occasions, having previously received a ban from Twitch for a wardrobe malfunction. Someone accused Kiraakitty of presumably taking advantage of her male viewers by scamming guys out of money – an accusation she publicly denied.

During her stream on September 15, before calling out her ‘down-bad’ fans, she states the target income she’d like to earn from her broadcasts. “In an initial investment, the initial capital of at least $100,000. But I try to be cheap with you guys, so I only ask for 100,000 bits.”

For context, Twitch bits, which are used in donations to streamers, are a virtual currency. 100,000 bits is roughly $1,000, which appears to be her goal for the live stream.

The comparison of her desired capita versus the donation amount creates a contrast between the money she’s asking for and her ideal goal. Kiraakitty then followed up by calling her viewers out while justifying her decrease in donation standards.

“I know you guys are all stay home boys, playing video games, trying to get past the next Valorant game. Not really rich guys, but it’s okay. I don’t really judge you.”

The clip cut off, with little context leftover from the previous broadcast. Kiaraakitty’s past streams are removed from the public’s eye shortly after they’re initially live. If the viewer subscribes, they’re able to see past videos.

An accusation was made that she was a scammer who had conned several men out of considerable amounts of money in 2021. The ‘evidence’ of this, such as it is, is a phone call that was uploaded onto a YouTube channel.

The recording featured  a woman admitting to scamming multiple men, and it was posted on YouTube on June 3 with the caption “Kiaraakitty exposed.”

The woman said, “I know guys when they’re lonely, and when they don’t have a good family situation, they are very vulnerable, so I just know what kind of people to target. I’ll ask them how’s life and let them open up, and when they open up, that’s when I know that I can take something from them.”

The woman being recorded admitted to having scammed at least seven men, including one with a disability, and one allegedly gave her his life savings of more than S$30,000 after she said she had a growth in her kidney.

The story grew rapidly and at the time of writing, the YouTube video has been viewed more than 90,000 times on YouTube, and the claims have even spread to popular Instagram accounts such as “Our Fallen Warriors,” which detailed elements of the different scams.

Kiaraakitty has denied all of the rumors and said the audio itself is fake, making a statement in one of her Instagram stories on June 5.

She wrote, “Hi everyone, I heard some rumors about me, just to let you all know is false and staged. Is so ridiculous that I made a police report and currently waiting for the police before I can let you all know what happens. Thank you so much for all your support and love to me.”

The streamer is yet to provide an update on how the police dealt with the situation. We will keep you updated on this story.