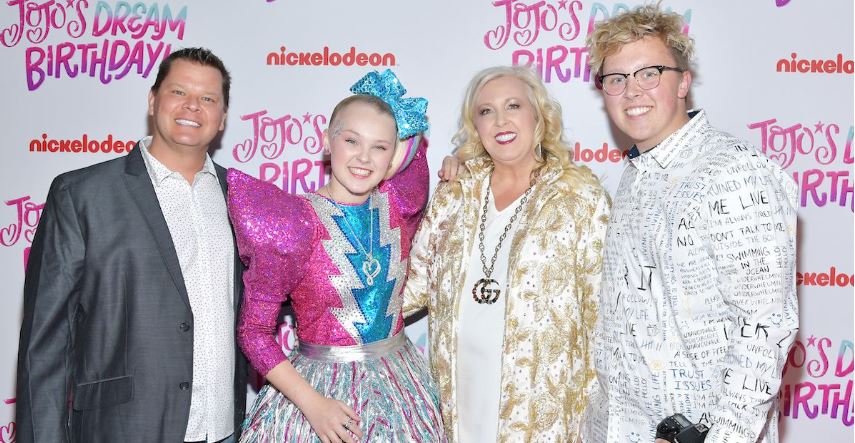 JoJo Siwa isn’t the only one in her family with an impressive YouTube following. Meet her parents and brother.

Known for her bubbly personality, her high-side ponytail, and her larger-than-life bows, dancer / social media star Joelle Joanie “JoJo” Siwa is an absolute icon for kids. After getting her start as a finalist in Abby’s Ultimate Dance Competition in 2013, the now-19-year-old won a spot on Abby Lee Miller’s ALDC dance team in 2015.

She earned a following of devoted fans after she started appearing on the hit Lifetime series Dance Moms, and JoJo subsequently began recording dance anthems.

While many children who get fame at an early age are unable to handle it, JoJo credits her parents, Jessalyn and Tom Siwa, for keeping her grounded. Her mom was the one who sent in JoJo’s audition tape to Abby’s Ultimate Dance Competition, and she always knew that her daughter would bring joy to the public.

Who are JoJo Siwa’s parents, and how many siblings does she have? Read on to find out more about the social media star’s upbringing and family life.

Who are JoJo Siwa’s parents?

JoJo was born in Omaha, Nebr. in 2003 to Tom and Jessalyn Siwa. Tom is a chiropractor, and Jessalyn is a dance instructor, which explains how JoJo got into dance in the first place.

The two are also parents to son Jayden, who was born in 2000. The family now resides in a $3 million home in Los Angeles that JoJo bought in December of 2019.

Both Tom and Jessalyn have Instagram accounts now where they express their pride for JoJo and Jayden. Jessalyn is fully devoted to her daughter’s career these days, and she works diligently on creating some of JoJo’s most blinged-out looks. She also was the original creator of the iconic bows that JoJo wore on Dance Moms.

Jessalyn said that JoJo helps kids be “their best selves.”

In March of 2019, Jessalyn and JoJo sat down with Sheinelle Jones from Today to discuss JoJo’s meteoric rise to fame, and how she’s been able to turn her role on Dance Moms into a multi-million dollar career.

When she was pregnant with JoJo, Jessalyn said that she could envision a little girl dancing and wearing bows. But, she never could have imagined just how popular the “D.R.E.A.M.” singer would become.

Jessalyn noted that she didn’t ask JoJo before she sent an audition video to Abby’s Ultimate Dance Competition, but that the then-10-year-old was thrilled when she found out that she made the show.

JoJo explained that her mom never put extreme pressure on her to succeed. She also said that if she decided to stop vlogging and performing in favor of another venture, Jessalyn would fully support her.

“She’s not a stage mom,” JoJo said about people’s biggest misconception about Jessalyn. “A lot of people think that my mom is crazy, and a lot of people think that she’s like, ‘oh you have to make a YouTube video and you have to perform good.’ [She’s] literally the most opposite of that. She’s like, ‘JoJo, turn your computer off and stop working.”

“Her thing is that she just wants me to be happy. My second dream in life is to be a surgeon, and if I was like, ‘I’m done with this, I want to be a surgeon,’ she’d be like ‘Are you sure? You worked really hard.’ I’d be like, ‘yes, Mom, I’m sure’ and she’d be like, ‘OK, we’re going to Harvard,'” JoJo continued. “She’d be really all about it.”

Jessalyn said that JoJo’s greatest gift, and the reason why kids around the country have flocked toward her content, is that she’s always positive and encouraging. While some believe that this is an act, Jessalyn explained that’s just who JoJo is.

“I think everyone just wants to be their best selves and JoJo makes you feel like it’s OK to be that way,” she said. “Because everyone feels a little awkward and a little insecure, no matter how amazing you really are. Everyone feels like that; so it’s OK. It’s normal.”

Does JoJo Siwa have siblings?

Over on YouTube, Jayden boasts a respectable 98,000 followers as “The Food Dude.” (Which pales in comparison to his superstar younger sister, who has a staggering 12 million subscribers. But still.) Jayden’s videos, as you might have already guessed, are centered on food — everything from trying interesting new products, to food challenges, to reviews, to tutorials on how to make his mom’s “famous” recipes.

The Siwa siblings appear to be incredibly close, for the record; JoJo often supports her brother by appearing in his videos and vice-versa. Plus, they always seem to be laughing and otherwise having a blast together.

During an interview with their mom on her podcast Success with Jess, Jayden opened up about his famous sister. “Everyone thinks Jojo has this camera personality and she’s fake off-camera and that is the farthest thing from true.” He later added, “She is very dedicated to her craft, always wants to take something to the next level.”

In addition to JoJo and Jayden’s shared social media star status, both Siwa siblings are also serious about their respective merch. You can snag hoodies with “The Food Dude” on them, burger T-shirts, bracelets, and more if you’re interested.

As of March 2021, Jayden is in a relationship with a young woman named Abbie Crandall. Since they became “Instagram official,” Jayden and Abbie have posted a pretty steady stream of couple photos— and they seem incredibly happy together.

In March 2021, Abbie offered fans a better idea of when her relationship with Jayden started. “The best 6 months. Nobody else I would want to be goofy with every day,” she captioned an Instagram photo of the couple, along with heart emojis.