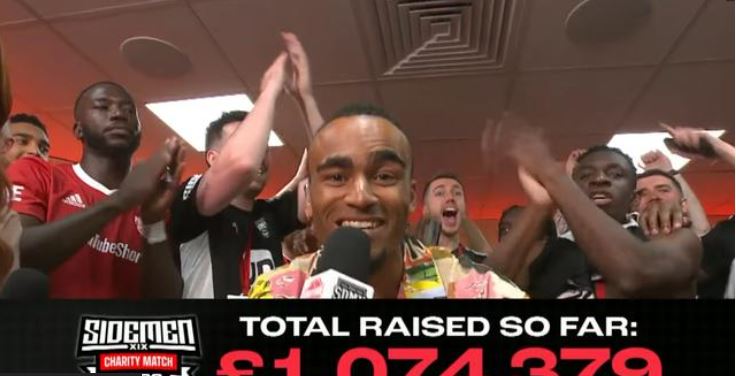 Through the Sidemen Charity Match 2022, over £1 million were raised over the course of the show match between a massive set of creators.

The Sidemen Charity Match has been a long time coming. It was postponed multiple times leading up to the 2022 event – the last being in 2018 – but the hype for the event was at an all-time high going in.

Being held at a football stadium that holds 27,000 people at max capacity, this show match was no small affair. And, thanks to donations from viewers all around the world, they managed to raise over £1 million for charity.

With a star-studded lineup, the Sidemen Charity Match was sure to bring in a lot of viewers. People like KSI, IShowSpeed, and MrBeast were among some of the biggest names to play during the event.

The stream peaked at around 2.6 million live viewers, not including everyone that showed up to spectate in person. And, with plenty of viewers came a lot of donations.

At halftime, it was revealed that almost £500,000 had already been raised for the event. While this was an impressive number at the time, it’d go on to be far surpassed by donations during the second half of the match.

Skip to the 5 minutes to enjoy the video

In just three hours, a total of £1,074,379 (1,166,614 USD), was raised and split between four different charities. This number may be even higher considering donations remained open past the initial on-stream announcement.

This show match had its fair share of highlight moments that kept viewers glued to the broadcast, and the donations far surpassed that of the £65,747 raised in 2018.

From IShowSpeed stealing a yellow card and celebrating after knocking down KSI, to the incredibly close 8-7 finish where the Sidemen reigned supreme. The Sidemen won the last charity match held as well, but with a much more one-sided score line of 7-1 in their favor.