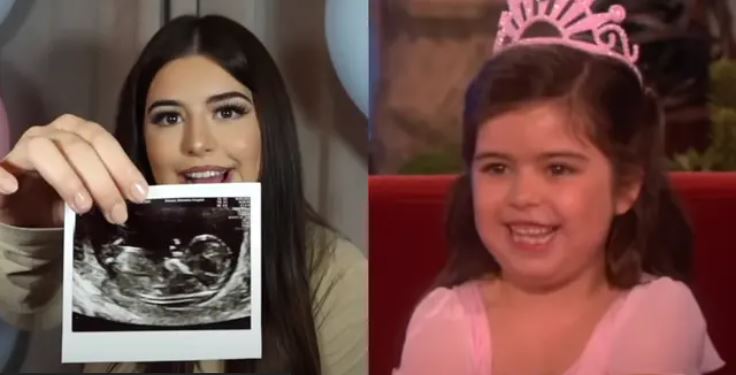 Sophia Grace Brownlee, best known for her appearances on The Ellen Show alongside her cousin Rosie, has announced that she is pregnant.

The cousins were subsequently invited to appear on The Ellen DeGeneres Show, after which they became reoccurring cast members of the show. They even had their own segment, ‘Tea Time with Sophia Grace & Rosie,’ where they met celebrities like Justin Bieber and Katy Perry.

Now, 19-year-old Sophia Grace has announced that she is pregnant with her first child. The star revealed the news in a YouTube video uploaded on October 22 titled, ‘I’m Pregnant.’

“I am here to tell you guys that I am pregnant,” she told viewers. “So I am 21 weeks today, and the reason why I left it so long is because I always want to make sure that everything’s completely fine and that everything’s safe.”

“I’m sure a lot of you are gonna be very shocked, because it probably was quite unexpected,” she said. “But I was very shocked when I first found out, I’ve got used to it now, and I’m super super happy about it, and I can’t wait to share this journey with you guys.”

Sophia Grace went on to reveal that although she knows the baby’s sex, she’s going to do a separate video revealing it.

Rosie shared her excitement for her cousin’s news on her Instagram story: “Together forever, words can’t explain this feeling! So excited for this next chapter, here for you, will buy milk, babysit, but I don’t think I can change a nappy just yet. Love you so much.”

The news surprised many fans, who have been flooding Sophia Grace’s comment section with messages congratulating her on her pregnancy.

Who is Sophia Grace’s baby daddy?

It is so clear that Sophia shares this bundle of joy with her mystery boyfriend.

Many have always wanted to know the name or see pictures of her boyfriend but since she has now entered the world of dating, unlike her videos, she told her fans not to expect her relationship to take center stage.

“I keep that side of my life pretty private, but I do have a boyfriend and I’ve been with him for maybe two years but I don’t post him on Instagram or anything,” she said. “Obviously, now that I’m older, that is a part of my life.”

Sophia shares a strong bond with her family. When not filming content for YouTube or Instagram, she can be found enjoying coffee dates or shopping trips with her mom and dad. And while Sophia Grace maintains she doesn’t have a “big friend group,” she remains closer than ever to Rosie.

“There’s like a 4-year age gap, we have been close like sisters,” Sophia Grace gushed. “People get mistaken because we don’t always post things together online. They think that we’re not close anymore. But we literally are like best friends.”

“We always have family meet ups at my nana’s house and we see each other. We’re still just as close as we ever were,” she continued. “We literally never had an argument and I hope that clears things up because for some reason, some people think we don’t like each other, which is completely the opposite.”