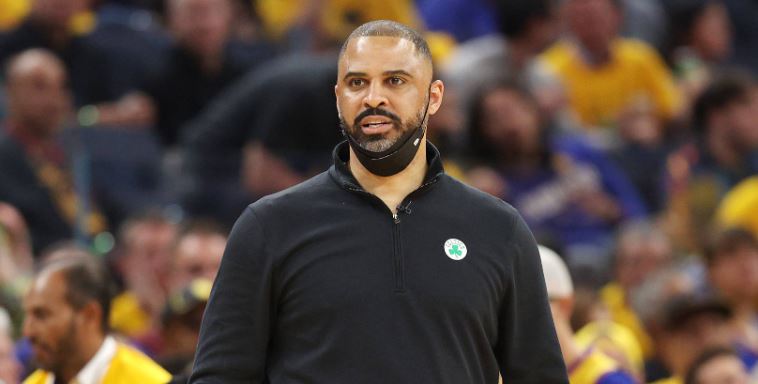 Who was Boston coach sleeping with? The internet has suggested names of the female Celtic Staffer Ime Udoka allegedly had an affair with.

Ime Udoka found himself in the headlines for all the wrong reasons this week when news came down that the Boston Celtics were preparing to discipline him.

Initially, ESPN NBA insider Adrian Wojnarowski reported that punishment of some sort was being prepared for Udoka over an unspecified violation of team rules.

Not long after, Shams Charania of The Athletic followed up with the specifics: Udoka had reportedly been involved in a “consensual” extramarital relationship with a team staffer.

Given the inappropriateness of this, it’s easy to see why the organization was preparing to punish its head coach. On Thursday, 22 September 2022, Ime was then suspended for a year with an immediate effect as the head coach of Boson Celtics.

Understandably, in light of the salacious nature of this whole ordeal and the fact that Udoka is married to beloved actress Nia Long, internet investigators immediately began to wonder who he cheated with.

Who was Boston coach sleeping with?

There have been uproars on the internet regarding who the Celtic female staffer Ime allegedly had an affair with. Many netizens have dropped their suggestions.

The Sports Rush reports Boston Celtics coach allegedly had an affair with female staff member Kathleen Nimmo-Lynch, who is the wife of a Senior VP.

As per Robert Littal of BSO, the former Lakers player was having a full-fledged affair with Kathleen Nimmo-Lynch. Unfortunately, Kathleen, though a staff member, is also the wife of a senior executive.

She is supposedly married to the Team’s Vice President of Finance & Controller Patrick Lynch. Though a rumor at the moment, this would explain the harsh punishment levied on Udoka.

Interestingly enough, Lynch actually got the job through her connections to Danny Ainge who now works with the Utah Jazz. Ainge and Lynch lived in the same town and she even went to school with Ainge’s daughter. The Daily Mail claims Ainge became aware of the affair and was upset due to the woman’s faith and marriage.

It didn’t take long for the suggestions to roll in:

“the Celtics’ only female staff member is their VP of Player and Organizational Development, Allison Feaster“. pic.twitter.com/BO8UukbLZT” — LakeShowYo suggested in a tweet.

“It is believed that the Celtics staffer Ime Udoka had an affair with was Allison Feaster, who played in the WNBA for 10 years and is now the Celtics’ Director of Player Development. pic.twitter.com/5f5thbpMW1” — Real NBA Rumors suggested in a tweet.

Now, to be clear, there is no confirmation one way or the other that she is involved. In fact, folks online had other theories about who the woman in question might be:

The Boston Celtics employee who had an “intimate relationship” with head coach Ime Udoka was reportedly responsible for arranging the travel schedule of Udoka’s longtime partner, Nia Long. While her identity remains anonymous, TMZ reports that organizing Long’s travel for away games was among her duties within the organization.

The woman was also reportedly involved in helping organization Long’s move to Boston.

Though the relationship was described as consensual, the woman accused Udoka of later making “unwanted comments” toward her. For the affair, Udoka ended up being for the entire 2022-23 season over “violations of team policies.”

Long addressed the story in a statement provided to People: “The outpouring of love and support from family, friends, and the community during this difficult time means so much to me. I ask that my privacy be respected as I process the recent events. Above all, I am a mother and will continue to focus on my children.”

Udoka apologized for his actions in a statement after the suspension became public.

“I want to apologize to our players, fans, the entire Celtics organization, and my family for letting them down,” he wrote. “I am sorry for putting the team in this difficult situation and I accept the team’s decision. Out of respect for everyone involved, I will have no further comment.”