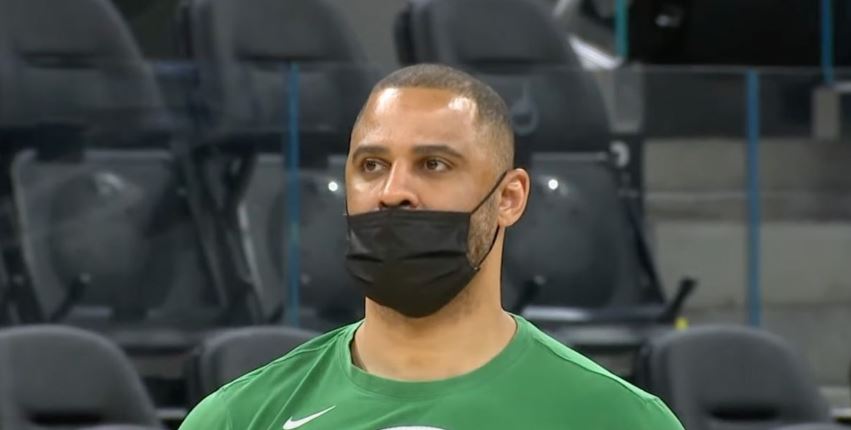 Ime Udoka is under fire for having a relationship with a Boston Celtics franchise member which subsequently led to his suspension.

Ever since Ime Udoka became the head coach of the Boston Celtics in June 2021, all eyes were on the former athlete. The 45-year-old’s work has spoken for itself since he coached the team through their first NBA Finals appearance in 2022 in 2010. Although the team fell short, many have praised Ime for his hard work and have expressed hope for a future title.

That said, if the Boston Celtics are able to achieve a championship title in the near future, it’s possible that won’t be under Ime’s leadership.

In case you’ve been out of the loop, Ime is currently under fire for having an intimate relationship with a franchise member.

According to Si, Celtics coach Ime Udoka was suspended by the organization for the entirety of the 2022–23 season on Thursday night for violating franchise rules. Udoka’s suspension came in wake of a report about his involvement in an “improper” consensual relationship with a female member of the team’s staff.

As the news of his suspension has hit the world, fans are wondering how his family is taking the news. So, it all leaves one looming question: Is Ime Udoka married? Will his relationship survive the scandal? Here’s everything that we know.

Ime Udoka and actress Nia Long have been engaged since 2015.

One unfortunate aspect of Ime’s scandal is that the Boston Celtics head coach has been in a longtime relationship. For folks that don’t stay abreast of celebrity relationships, People reports that Ime and beloved actress Nia Long got engaged in 2015 and have been dating since 2010.

The outlet shares that Nia and Ime were first introduced by a mutual friend in 2010, and since then, the pair have been inseparable. Ime and Nia went on to have a son, Kez Sunday, in 2011 together and have continued to support one another through their career endeavors.

“We both have beautiful careers,” Nia said after Ime scored the head coach position in boston via People. “The thing that I think makes it work for us is we give each other the space and time to do what we have to do individually, as well as together.”

Not to mention, Nia was a permanent fixture at the 2022 NBA Finals game to cheer on Ime and the Boston Celtics.

However, in light of Ime’s cheating scandal, there’s no telling if Ime and Nia’s relationship will go the distance. Interestingly, Nia has remained noticeably mum since news of the scandal has made its rounds.

How does one cheat on Nia Long? This is the burning question making its round on social media.

Most people would agree that Nia is drop-dead gorgeous. Ever since beauty appeared in the 1991 film Boyz n The Hood and went on to star in several fan-favorite projects including 1997’s Love Jones and Soul Food, 1999’s The Best Man, and more films, the world fell in love with her beauty and acting skills. I mean, the woman ages like fine wine.

That said, social media is notorious for dragging celebrities for their wrongdoings, and Ime is no exception to the rule. So the fact that Ime had the nerve to step out on Nia has left social media users perplexed.

Some users questioned how Ime could “fumble” Nia, others called the 45-year-old “crazy,’ and everyone came to the general consensus that Nia should move on with her life.

Although fans are interested to see where Ime and Nia go from here, many are currently awaiting his fate with the Boston Celtics. Per ESPN, Ime is currently facing a year-long suspension from his duties. After all, engaging in a romantic relationship with a member of the franchise violates the company’s code of conduct.