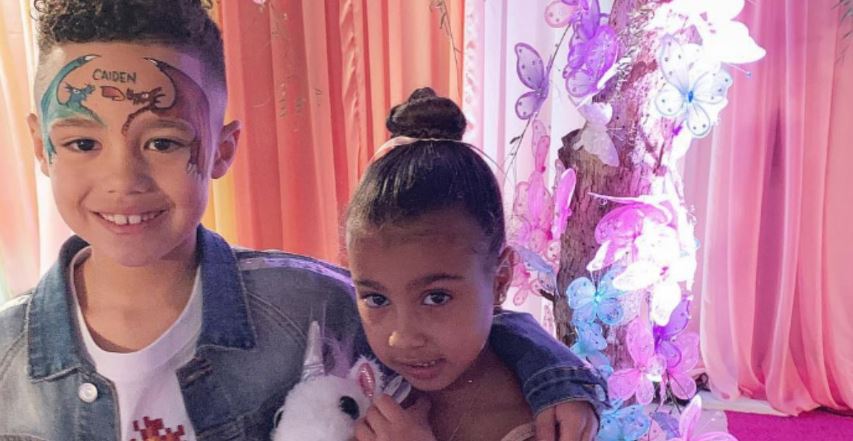 Does Kanye West’s daughter North West have a boyfriend? She received Tiffany & Co. gifts from her rumored boyfriend, Caiden Mills, in 2018.

There were a lot of different responses to the news that Kanye West and Kim Kardashian‘s 9-year-old daughter, North West, already has an 11-year-old boyfriend.

Netizens got so skeeved out over these social media posts from North West’s “man,” Caiden Mills. This cute kid is an aspiring rapper, with parents who definitely know how to dress him.

Caiden Mills’ father is Consequence and his mother is Jenthepen. Consequence is a rapper while Jen is a social media influencer and marketer who was once a radio and reality Tv star. Well, from the looks on Jen’s Instagram page, she and Con have split up as she has a new baby boy with her new man whose name is Dennis.

Judging from Mills’ Instagram account, he’s got a more charmed life than most of us have. He has met with most of the top Hollywood celebrities. Look at him just chilling with NBA legend, Scottie Pippen.

He’s also got the cash lying around to get his then 5-year-old, unicorn-loving girlfriend some nice gifts too: bling from Tiffany’s. And while it’s cute in a way that he’s going and getting his “girlfriend” jewelry, people are unnerved at the fact that all of it is being broadcast on social media, and with captions that are clearly not written by an 11-year-old, but by his parents, or managers of his account.

Captions like, “Shout out to Northie, Babygirl I’ll see you soon.” and “Boo’d up” are making people feel uneasy online. That, coupled with the fact that he’s taking photos that look like something that’d be on an adult’s account, makes it look like he’s being forced to grow up way too fast and not enjoying his childhood.

On the other hand, there’s an undeniable amount of adoration to be had at seeing just how darn cute these kids are. Kanye and Kim love to set up play dates with the little man and seem to be absolutely smitten with him.

Although there’s definitely a clear reason why he’s so active on social media: he’s trying to get into the game from a very, very young age.

Caiden penned a song about a previous “crush” Nicki Minaj. His track “Dream about Nicki” earned him some love from the female rapper online and he even managed to meet her in real life and perform a couple of songs for her management team.

While his pics of hugging and getting kissed on the cheek by Minaj are feel-good, there are still many who are skeeved out by how hard Caiden’s being pushed as a child star, with some going so far as to call it “exploitation.”

There was also a lot of condemnation about the way certain media outlets covered the relationship, namely the language that was used in discussing how they were “boyfriend” and “girlfriend”; that it teeter-tottered the line of being cute and stepped well into the territory of straight up creepy.

Excellent social media management and playing the publicity game is an undeniable way to make money – the Kardashians have proven to be experts at it, so why are so many people at this North West/Caiden Mills story?

I think it has to do with the fact that it’s involving children and potentially exploiting them for profit. It’s pretty much a given that everyone understands when an adult is willing to “sell themselves” out and debase themselves in order to make a quick buck. Sure we hate them for it, but we still understand it because adults, often, are a lost cause.

But these are kids we’re talking about.

Arguably, North West will never be out of the spotlight due to who her mother and father are, but thrusting her, and Caiden, into the spotlight from a young age basically forces their hand into being this type of media darling, especially when they’re too young to make that decision for themselves.

Once you’re a public figure, you can’t really take that back, and I think that’s why people are so up in arms and generally creeped the heck out over this story.

From what we know, Caiden Mills and North West were never dating. They are friends who regularly hand out. North West getting a Tiffany & Co. gifts from Caiden meant nothing but just handging out and showing love to the daughter of the Grammy award winner and the reality Tv star.

As of 2022, there have not been any new report or pictures that prove Caiden and North were and is an item.

North West is still schooling, recently her parents had a bit of misunderstanding over her school as Kanye West asked Kim to alow their kids to attend Donda Academy.

Caiden Mills is a budding rapper and a student as well.