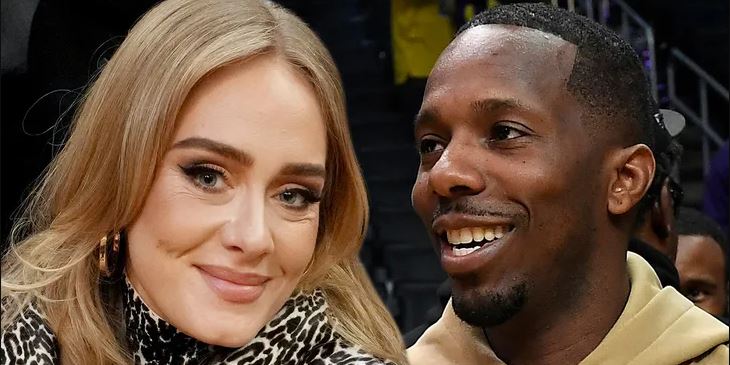 Adele and her boyfriend Rich Paul are still together as she speaks about wanting more kids with him.

She also said that cancelling her Vegas residency was “the worst moment in my career.”

Adele is all in on Rich Paul. The singer and the sports agent have been together for a while now, and Adele said a couple of months ago that she was considering having kids with him. In a recent interview with Elle UK, the “Rolling In The Deep” singer doubled down on her previous statements.

“I’m obsessed with him,” Adele said, adding, “I definitely want more kids.” She continued to reiterate her affection for Paul throughout the interview, saying she’s “happy as [she’ll] ever be,” and that she’s “never been in love like this.”

In the interview, Adele also discussed her messy cancelation of her Las Vegas residency. Back in January, the British singer had cancelled the performances, saying that due to COVID she and her team couldn’t get ready in time. Now, she claims that the incident was embarrassing and “the worst moment in [her] career by far.” She added, “I was so excited about those shows. It was devastating.”

She also elaborated on why exactly she felt the show had to be cancelled. “There was just no soul in it,” she told Elle. “The stage setup wasn’t right. It was very disconnected from me and my band, and it lacked intimacy. And maybe I tried too hard to give it those things in such a controlled environment.”

Last month, the singer rescheduled the show dates, saying the residency will occur this fall through next spring. Now she says she’s completely focused on getting the new performances fully prepared. “All I got in my brain is Vegas,” she said. “I wanna f**king nail it.” She promised that the hard work will pay off: “It’s gonna be really beautiful.”

Adele Reveals How She Met Her Boyfriend Rich Paul

No dating apps, just old-fashioned love for Adele. The “Easy on Me” singer opened up about the moment she met her boyfriend Rich Paul and how he has changed her perspective on love.

The Grammy-winning superstar dished on the moment she met her sports agent boyfriend during CBS’ Adele One Night Only special on Nov. 14. “I met him at a birthday party, we were on the dance floor,” she told Oprah Winfrey about their initial encounter. “And then we met a couple years later. We went out for dinner, which he says was a business meeting and I’m like ‘A business meeting about what?’ And then it was the first time we hung out on our own. Without friends and I think that was a natural way that people would meet each other in real life.”

So what is it about Rich that has Adele so smitten? “He’s just hilarious. He’s so funny,” she shared. “And very smart. Very, very smart. It’s quite incredible watching him do what he does and just the easiness of it and very smooth.”

Referring to her lead single from her upcoming album 30, she added, “He’s making it easy on me.”

Adele, 34, and Rich, 40, first sparked romance rumors in July—just four months after finalizing her divorce from ex-husband Simon Konecki with whom she shares a son named Angelo Adkins. After months of being spotted out on date nights, in September, Adele and Rich made their love Instagram official.

The “Hello” songstress also shared why this love is different from past relationships. “[It’s] the first time I’ve loved myself and been open to loving and being loved by someone else,” she revealed. “Yeah, by arriving and turning up. Maybe I’m getting a different version of him as well. It’s just timing.”

Adele may be dating a sports agent, but in this phase of her life—there are no more games.

“I don’t treat [love] like a game anymore,” she said. “You know that thing that, ‘You’re going to hurt me so I’m gonna hurt you first?’ I’m not like that anymore.” Instead, she said she’s looking for, “Peace of mind and stability. I don’t have to expect someone else to give me stability. I can also be stable by myself. A solid house that doesn’t blow over in a storm.”