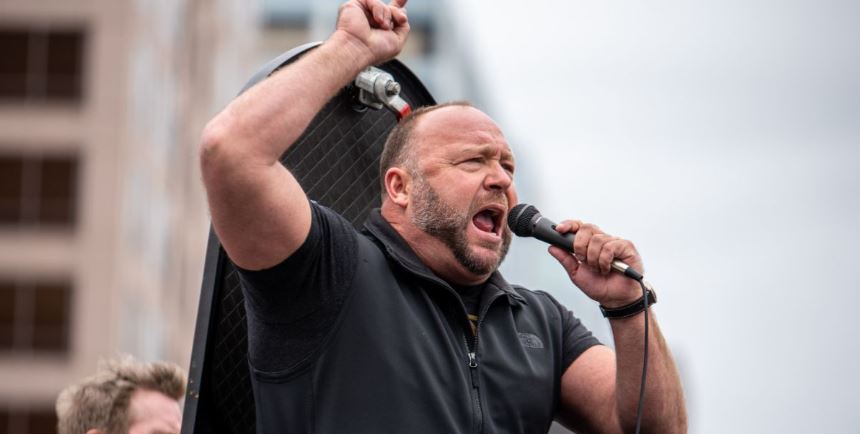 Alex Jones is currently in his second marriage to Erika Wulff-Jones and he’s faced legal troubles with his both wives.

Controversial host Alex Jones is facing legal action right now. He’s in court after being sued by Sandy Hook parents Neil Heslin and Scarlett Lewis following Alex’s false claims that the shooting wasn’t real. According to CNN, they won a default judgment against the commentator earlier in 2022 and now they are seeking $150 million in damages.

Unfortunately for Alex, this isn’t the only legal trouble he’s been a part of. In 2021, his wife was arrested for domestic violence against him. But who is she and what happened surrounding the charges against her? Here’s what we know.

Who is Alex Jones’ wife?

Alex is married to Erika Wulff-Jones. She calls herself a “pragmatic patriot” on Twitter, and per her LinkedIn she’s a yoga instructor. She founded New Order Yoga in May 2012 and has been running it ever since. Her studio focuses on individualized instruction for all who enter through a mix of traditional and “radically new techniques.”

Alex and Erika got married in 2017, but it hasn’t all been smooth sailing. On Dec. 24, 2021, she was arrested for domestic violence in Austin, Texas. According to the Daily Mail, she had “misdemeanor charges of assault causing bodily injury to a family member and resisting arrest, search or transport.” It wasn’t immediately clear at the time whom she had allegedly assaulted.

“It’s a private family matter that happened on Christmas Eve,” Alex told the Associated Press (per Daily Mail) after Erika’s arrest. “I love my wife and care about her and it appears to be some kind of medication imbalance.”

Because of these charges, Erika spent Christmas that year in jail. Then on the following day, she was released on $3K each for two charges.

It later came out that the domestic violence charges came about after Erika hit Alex more than 20 times, according to police documents obtained by The Daily Beast. Afterward, she reportedly threatened to hit him again with a stone object.

The publication reported that according to the Travis County arrest affidavit, Alex called the police and said his wife was going to hit him with “a polished club in her hand.”

In addition, the affidavit said that Erika had hit Alex with closed fists and open palms. All of this reportedly started because she accused him of cheating on her. One of the officers on the scene also said that Erika smelled like alcohol.

Today, the couple is still together.

Does Alex Jones have kids?

Alex and Erika have one child together. But he also has three children from a previous marriage. He was married to a woman named Kelly Rebecca Nichols. She’s an animal rights activist, according to The Sun, and the two married in 2007 but divorced in 2015.

Currently, Alex and Kelly are still fighting over custody. Kelly wants full custody because she doesn’t feel like he’s “stable,” per The Sun.

And now that his lawyer in these current legal issues appeared to have accidentally released two years’ worth of information from his phone, Alex thinks she is going to use it against him with his kids.

“I know the texts and information on his phone will be evidence of all the nefarious, truly conspiratorial things said between him and his employees in their plans to keep my kids from me,” Alex told Insider, per Yahoo! News. “It’s not even about my kids, it’s about control. Controlling me.”