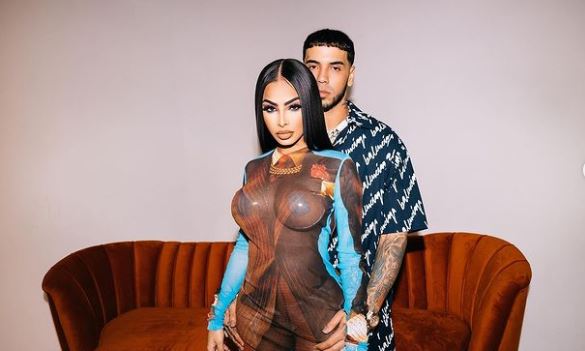 It’s official — Puerto Rican reggaetonero Anuel AA and fiancée Yailín La Más Viral have tied the knot, and it’s no “Secreto” they are on cloud nine.

Anuel, 29, made his relationship with Dominican singer and dancer Yailín, 21, Instagram official back in January 2022, posting a video of the two of them kissing with the caption: “They can talk all the s— they want… I WILL NEVER LEAVE YOU ALONE!!!!!!!! 👹❤️😈👩🏼‍❤️‍💋‍👨🏽😍😘🥰💍 @yailinlamasviralreal.”

The two released a song together titled, “Si Tu Me Busca” in February, with lyrics like: “Mami, how much do you love me? With money and without money” and “If they ask about loyalty, mami, you are what that means.”

On June 10, the two finally announced to all their fans that they were legally married. Anuel posted an adorable Instagram video of the two of them being pronounced man and wife, in which two immediately smile and embrace. He captioned it with, “Everything in God’s hands 🙏🏽🙏🏽🙏🏽🙏🏽🙏🏽 @yailinlamasviralreal WORDS DON’T MATTER ANYMORE!!!!!!!👰🏽‍♀️🤵🏽‍♂️💒😘🥰😍❤️💕💍👹😈❤️‍🔥💗💓💘.”

Yailín posted photos of the two signing their marriage certificate, nothing but wide smiles in sight while dressed in full-black outfits. The singer and dancer captioned the photos with something just as romantic: “👰‍♀️🤵🏻‍♂️ I love you, I never imagined this moment nor how it would feel.” She continued, “I hope this lasts years and years together and giving each other all the love in the world… thank you for making me your wife @anuel 💍.” We are obsessed!

Since announcing their relationship back in January, the two have often posted about each other on social media and even given interviews together. While tons of Instagram posts show how adorable the couple is together, whether they’re attending basketball games or wearing matching outfits, a recent interview with the Alofoke Radio Show gave us tons of insight into their relationship.

Per the interview released just last week, Anuel knew of Yailín before they met, but once they saw each other in person, they felt “married” from the first day.

Yailín talked about the connection between the two, saying she was immediately “nervous” when she first met him. Meanwhile, Anuel talked about how they danced bachata, and how humble she is. They also kissed and gave each other “cariñitos,” but did not go further than that on the first night.