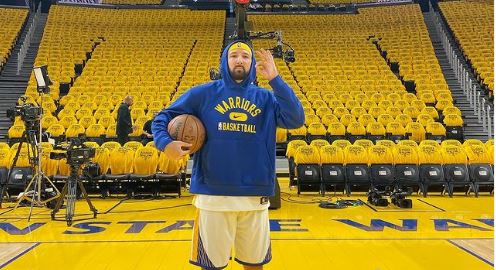 How much money does BigDawsTv make on YouTube? Is Daws Gurley rich? The YouTube channel is one of the biggest Entertainment platforms on the video-sharing site.

Big Daws, real name Dawson Gurley, is a 29-year-old American YouTube personality, known for the channel BigDawsTv consisting of pranks, with a second channel called BigDawsVlogs consisting of vlogs and extra footage from his main channel.

He is married to his longtime girlfriend by the name of Kelly Cecil Gurley. They began dating on 22 April 2017. The couple has a son named Myles Wade.

BigDawstv has made an impressive net worth from his YouTube career. His main sources of income are YouTube ads, merchandise, sponsorships, and partnership. So, what is Dawson Gurley’s net worth and how much does he make on YouTube?

Who is Dawson Gurley?

Dawson Gurley, also known as Big Daws, is an American YouTube personality, known for the channel Big Daws TV (stylized BigDawsTv) consisting of pranks, with a second channel called BigDawsVlogs consisting of vlogs and extra footage from his main channel.

Gurley was born on May 19, 1993, in Olathe, Kansas, and graduated from Olathe East High School. He then received an associate degree from Mesa Community College.

How did Big Daws get famous?

Gurley started making videos when he was 11 years old, inspired by Jackass movie after receiving a camera as a gift for Christmas from his parents.

Gurley started his YouTube career in 2012, He started filming videos on the campus of Arizona State University. Some of his videos started going viral in 2014.

Through the Golden State Warriors’ championship runs of the late 2010s-early 2020s, he became prominent among the team’s fanbase for bearing a striking resemblance to star player Klay Thompson.

Gurley reportedly tried to use that to his advantage by gaining access to the Chase Center court prior to Game 5 of the 2022 NBA Finals, which led to the team permanently banning him from the arena.

Dawson joined YouTube on June 20, 2012. At the end of June 2015, Dawson reached 1 million subscribers on his YouTube channel. His main channel name is BigDawsTv, which has 8.34 million subscribers with 314 uploaded videos as of June 27, 2022. It has over 14 billion total views.

He also has a second channel, BigDawsVlogs, formerly named BigDawsTvExtras, where he shares extra footage from his key videos and also posts vlogs, with over 1.25 million subscribers with just 528 uploaded videos. Clips on his second channel created on 17 June 2013 has over 197 million views.

When he was 11 years old, he was inspired by the Jackass movie and started filming videos after his parents received a video camera as a Christmas gift.

In 2011, he was awarded his degree from Olathe Eastern High School. BigDawsTv is a part of the Richest Stars and Richest Celebrities.

How much does BigDawsTv make on YouTube in a day, a week, a month, a year? (YouTube Earnings)

Dawson Gurley of BigDawsTv makes daily YouTube earnings of $257 – $4.1K on his main channel and $7 – $110 on his second channel, according to Social Blade.

Dawson Gurley of BigDawsTv has a net worth of $3 million as of 2022, according to Naibuzz. So, how does Dawson Gurley make his money? His main source of income is YouTube ads, merchandise, sponsorships, and partnerships.

Dawson Gurley of BigDawsTv is married to his longtime girlfriend called Kelly Cecil. The couple started dating on April 22, 2017. The couple has a son named Myles Wade.

Information about Dawson’s family (father, mother, siblings) is not out on the internet yet. Dawson’s family affair was basketball. His uncle Greg Gurley played in Kansas in the 1990s and Dawson occasionally tried his luck in the hoops against Scot Pollard and former Jawk and NBA great man.

Many people tell Dawson that he looks like NBA champion Klay Thompson. To prove it, he uploaded a video of him pretending to be Klay which has received over 15 million views. Recently, he sneaked into Chase Center for the NBA Final Game and got banned for impersonating Klay Thompson.

Big Daws will earn his nickname for Olathe East Hawks, Kansas‘ nationally ranking. He attended high school when the Seattle SuperSonics moved to the town of Oklahoma as Thunder and became a fan, as they were Kansas City’s closest team.

After high school, he says, “I was able to play at college in the neighborhood and I did not really see that as an important opportunity.”

He was inspired to begin filming his own stunts and bumps when he was 11 years old. His second childhood passion appeared to him to follow in full making him now a full-time YouTuber.