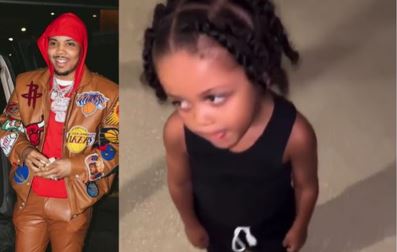 Model Ari Fletcher has blasted people who have something negative to say about the latest video of her and Gherbo’s son Yoshon.

On Father’s Day, rapper GHerbo was seen sharing quality time with all his three children. He shared pictures on his Instagram but has deleted them later.

One of the moments was seen in a video which also captured his son with Ari Fletcher. The video has trended on social media platforms.

Yoshon could be heard in the video saying “You wanna fight or you wanna run your mouth”? while he attempts to get his daddy’s chain from his neck.

After the video gained traction on social media, a lot netizens cristised on Yoshon’s behavior. One Twitter user with the handle @AshCash0890 took beneath the video, in the comment section and wrote “y’all be laughing at this behavior… this is not IT”.

The model mother of Yoshon, Ari Fletcher, after sighting on these ‘hate’ comments about her son clapped back at people who have something negative to say about the latest video of her and Gherbo’s son Yoshon.

Later on, Ari Fletcher, the self-acclaimed ‘billionaire to be’ slammed critics to look for means to make money rather than talk about people. “Y’all got more opinions than y’all do dollars and that’s the mf problem”, she wrote.

Rapper Fatboy SSE also chipped into the matter and noting that people who do talk about other’s kids shold be ashamed. “Ppl always got something to say about somebody else’s kids YALL should be ashamed of yourselves real talk it really make me sick shut up & worry about yo kids”, Fatboy wrote