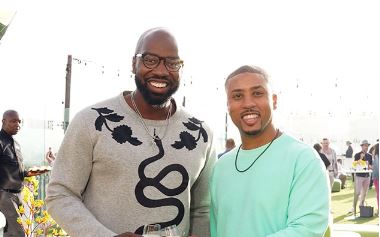 Greg Mathis Jr. and his boyfriend Elliott have taken a big step in their relationship as they move from Greg’s parents’ house in Washington D.C. to live together in Los Angeles.

After sharing his coming out story on Mathis Family Matters, Greg Mathis Jr. and his boyfriend Elliott Cooper are taking the next step in their relationship. On the June 26 episode of the E! reality series, the couple decided it was time to say goodbye to Greg’s parents, Judge Greg Mathis and Linda Mathis, move out and find a place of their own.

They made the decision in California, but not before reflecting on their first-ever date in D.C. “Me and Elliott met on Valentine’s Day,” Greg Jr. recalled. “Got a little drunk, went back to my place, and let’s just say, we didn’t read the Bible.”

Back to the matter at hand, Elliott—who’s from the South—expressed that while he hasn’t gotten used to the LA lifestyle just yet, he wanted Greg Jr. to be happy. And what will would make Greg Jr. happy, is living closer to his parents and siblings Amir Mathis, Jade Mathis, and Camara Mathis Webb and her family.

Greg Jr. admitted this himself in a confessional, explaining, “I know that Elliott is the man that I wanna be with. I also know that I wanna be in Los Angeles. I don’t wanna be in a position where I have to choose between Elliott and my family, so I gotta convince Elliott that LA is where we both need to be permanent.”

They weren’t the only Mathis family members making the official move to the West Coast, as Greg Jr. asked Jade to join him and Elliott in moving to LA. “Greg and Elliott don’t know how much it means to me that they asked me to live with them,” Jade said. “They’ve been my rock, especially during some difficult times in D.C., and that means so much to me.”

Having worked as a prosecutor in D.C. for many years, Jade explained that heavy cases started to take a toll on her—something that was particularly concerning as she lives with mental illness. But upon moving to LA, Jade shared that she’s “starting to feel alive again.”

After checking out a few houses, the trio finally landed on one to call “home.” Greg Jr. knew it would take some time for Elliott to adjust to the cross-country move, but also that “one little win at a time will eventually add up to a complete victory.”

“Part of getting this house is knowing how much it’s gonna really get Elliott to like LA just a little bit more,” he added. “It has all the things he would love.”