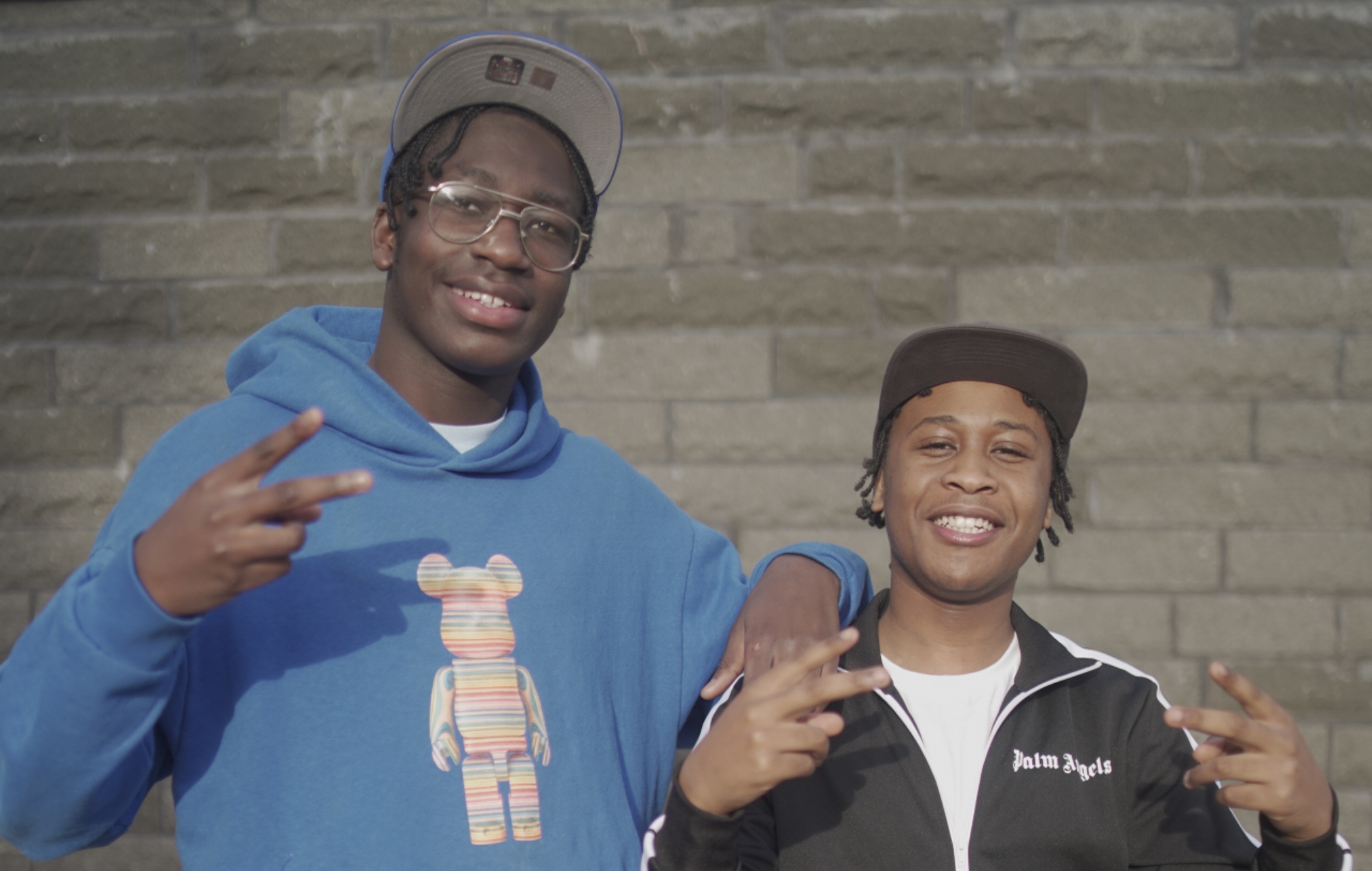 Who are UK rappers A1 x J1? Biography facts about the young duo and how a Houseparty changed their lives.

It is likely you have bobbed your head or tapped your foot to a song titled “Latest Trends” or “Night Away”, without knowing it came from two teenagers.

A1 x J1 are one of the many rappers from the United Kingdom.

From going viral on TikTok to gaining international fame and bagging top nominations within just a few years, the rapper duo has a unique background story as to how they met. So, who are the UK rappers A1 x J1?

A1 x J1 (real names Phineas Waweru and Joshua Somerkun) are a British hip hop duo. They released their debut single “Latest Trends” in February 2021, which charted at number 2 in the UK and was remixed by Aitch and A Boogie wit da Hoodie.

Their second single “Baby” featured British singer and rapper Deno. They were also featured on the deluxe edition of KSI‘s album All Over the Place, and on the debut single by British rapper SwitchOTR, as well as recording a song for the Plugged In series by Fumez the Engineer.

Unfortunately, the birthdays of the rapper duo are not known however, J1 is 18 years old and A1 is 16 years old now.

16-year-old A1 is originally from Coventry and he is still a student studying for his GCSEs.

A1 lives with his mum and little sister in Coventry and said the support has been amazing at home and in school.

J1 from Kent is studying music technology at college.

How did A1 x J1 meet and are they even brothers?

The pair have got many to think about whether they are related or not. The truth is, they are just friends.

According to Coventry Telegraph, the two met at the start of the pandemic on the Houseparty app.

The pair didn’t know each other before meeting at Houseparty during the lockdown in March 2020.

Realising they shared rapping aspirations, they came together remotely to create their song, Latest Trends, which has since rocketed to the top of the charts.

It’s an unbelievable story, and they have balanced all of this alongside their school books. So just how have they managed it?

CoventryLive spoke to 15-year-old A1, who filled us in over Zoom after a busy day of revision.

“It was completely random, J1 joined [our chat on Houseparty] and we start talking, he tells me that he’s a rapper and at that time I said I did freestyles on Instagram, and he said me too, we started talking about music, and realised we were quite similar, and yeah man, we literally connected, and now J1 is like a brother to me.”

He added: “It feels amazing, it feels so special, the fact that I didn’t want J1 to put that Tik Tok up, I was like what are you doing, take it down, J1 was like no, it’s staying, and to see where it was and where it is now is beautiful, it’s a blessing.”

A1 is currently in year 11 at school in Coventry, but speaks like someone ten years older, describing how he manages his time equally between his music and studies.

One major thing they had in common was the freestyle videos they’d both been posting on Instagram.

BBC reports that the pair started off by releasing a 15-second clip of their song on the video-sharing platform Tik Tok, which went viral, hitting more than 2 million views, leading them to release it officially – but A1 was reluctant to share their tracks on TikTok.

“For me, it’s a thing where I don’t like people judging too much, especially when it comes to music. I was scared to put it out.”

J1 went ahead and did it anyway, for which A1 says he’s “thankful”.

“We didn’t know it was going to do this well. And then it just started taking off,” J1 says.

The two went viral and gained fame with their song “Latest Trends” which was released in 2021. “The fact that I showed my friends the song before it went on Tik Tok, this song is amazing, this is it, I didn’t really take it in, but it is like whoa, people said it was a hit.”

The artists now have over 2.6 million monthly listeners on Spotify, with fans including the likes of KSI and Aitch. Aitch liked them so much that he featured on the remix of Latest Trends.

“Literally, that experience with Aitch was amazing, seeing Aitch enter the room we were shocked, me and J1 looked at each other and said Aitch is in the studio!” A1 said.

“He posted on his Snapchat that he wanted A1 and J1. And I was shocked – there’s no way Aitch wants to see us,” J1 says.

When Aitch walked into the studio where A1 and J1 were working, J1 admits his “mouth dropped”.

“That’s Aitch in the same place as us, and he lays down his verse in that studio session we’re in. It was amazing.”

A1 adds: “He’s a great guy honestly. We just bounce off each other, it all happened very naturally and it wasn’t forced.”

How are the duo handling fame?

The rapper duo is just ordinary teenagers who are currently schooling and have gained fame.

But they now have to fit studies around making music for millions of fans.

“I have to distribute my time so I know when to revise and when I can go on my phone and relax or write lyrics,” A1 says.

With stardom comes attention, and it’s something they are getting used to – even in the school canteen.

“People actually notice us walking in and you’re getting stared at when you’re eating,” J1 says.

“I went out in the park and I was getting stopped for pictures.”

A1 and J1 are grateful for how much their lives have changed since they met.

“Last year I’d be sleeping on my bed and my family would say go wash the plates. Now, they tell me to get up and go to the studio,” J1 says.

A1 adds: “If I didn’t go on my phone and go to Houseparty at that exact moment, I may never have met J1. It just shows that sometimes God brings people in your life for a reason.”

A1 x J1 has made quite a few songs with almost all being bangers. Aside from their own songs, they have gained features and guest appearances in other artists’ songs and music videos.

Some of their songs include “Latest Trends” (Solo or remix with Aitch or A Boogie wit da Hoodie), “Plugged In” (with Fumez the Engineer), “Baby” (featuring Deno), “Night Away (Dance (featuring Tion Wayne), and “Deal or No Deal” (with Mabel).

One of A1 x J1’s most viral featured songs is “Coming for You” by SwitchOTR.

The member of the rap group has had two major nominations so far. In 2021, they were nominated for Song of the year with their hit single “Latest Trends” at the MOBO Awards.

In 2022, they were nominated for BRIT Awards for Song of the year with their song ‘Latest Trends”.

The UK rapper duo has not disclosed their financial details yet. They however have an improved net worth lesser than $1 million.

Their sources of income are from music streams, performances, collaborations, shows, and other endeavors.