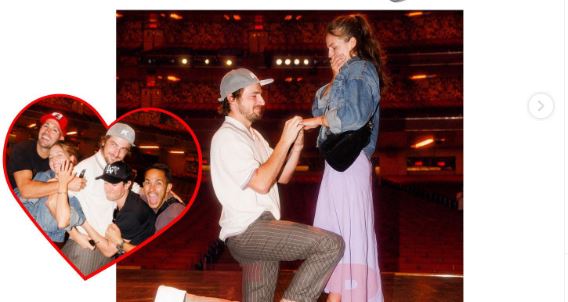 Kendall Schmidt popped the question to girlfriend Mica von Turkovich after seven years of dating. The Big Time Rush singer announced his engagement on Instagram on June 30 by posting photos of himself getting down on one knee onstage in New York, captioning the moment, “My heart and soul. I’ll love you forever.”

According to People, Kendall, 31, proposed to the writer on June 29 at Radio City Music Hall, where bandmates Logan Henderson, Carlos PenaVega and James Maslow were in attendance.

“FINALLY!!! Yea!!!! So happy for u guys!!!” Carlos shared, while Logan added, “Im not crying YOU ARE! Love you both beyond words.”

They all celebrated the next day when Big Time Rush’s reunion tour took over Madison Square Garden in the Big Apple, with Mica showing her support for the concert on social media.

Back in March, Kendall and Mica celebrated their seventh anniversary with a beachside photo shoot. “7 years of loving you,” Mica wrote at the time. “1 million more por favor.”

And although Kendall calls the bride-to-be his “one and only,” the pair also has plenty of love for their dog, Teagan.

Who is Mica von Turkovich?

Mica grew up in Vermont and pursued an acting career, but eventually found that “the unappealing reality of the entertainment industry ultimately led me back to writing,” she shared on her website, “and I couldn’t be happier about it.”

She now describes herself as a plant-based foodie, personal trainer, and birth doula, according to her Instagram bio.

Who is Kendall Schmidt?

As for Kendall, he is best known for playing Kendall Knight on Big Time Rush from 2009 to 2013, but he more recently portrayed Ryan on Are You There God? It’s Me Margot and Justin on the TV adaptation of School of Rock.

This summer, he’s touring the country with Big Time Rush, as Mica has been cheering him on from the crowd.

“Watching all of this come together from the sidelines made these moments that much more exciting to watch,” she wrote on Instagram after watching the band perform last year. “And my Kendall… I love you and I’m so freakin proud of you.”