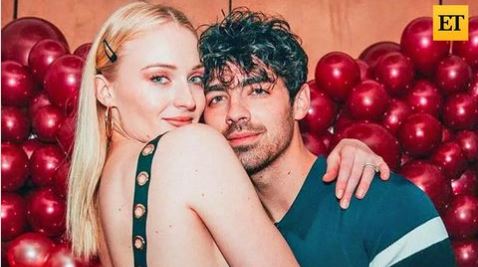 After welcoming a second baby, Joe Jonas shared a sweet video with his wife Sophie Turner on Instagram, looking back on moments from their epic love story.

Joe Jonas is just in love with his wife Sophie Turner.

After news broke on July 14 that they had welcomed their second baby girl, the Jonas Brothers singer, 32, shared a touching video of him and his wife’s cutest moments over the years. The Instagram post, which was shared to the tune of his rock band DNCE‘s song “Got Me Good,” features clips of him and Sophie in bed cuddling together and images from their 2019 Las Vegas wedding.

“Started from the bottom now we’re here,” Joe captioned the July 15 video. “I want to see your love story.

The singer’s post comes just one day after the couple—parents to 23-month-old daughter Willa Jonas—confirmed the birth of their second daughter to People, saying in a statement, “Joe and Sophie are happy to announce the arrival of their baby girl.”

While the pair is adjusting to the life of being parents of two, Sophie, 26, previously shared her excitement for Willa becoming a big sister.

“It’s what life is about for me—raising the next generation,” the Game of Thrones star told Elle UK in June. “The greatest thing in life is seeing my daughter go from strength to strength. We’re so excited to be expanding the family. It’s the best blessing ever.”

And though Sophie and the “Sucker” singer have opted to keep their relationship and family business out of the spotlight, they have spoken out about being parents to their oldest daughter over the last two years.

“It’s been amazing,” Joe recalled of his time as a dad during a May 2021 interview on CBS This Morning. He added of their quality time together, “I’m so thankful and grateful.”

How did Joe Jonas and Sophie Turner meet?

Turner and Jonas met up at a local bar in Camden, UK, and the actress brought some friends as backup in case he turned out to be a catfish. “I expected him to show up with security and everything. I thought, ‘He’s gonna be such a d—,'” Turner told Elle magazine in a cover story released in March 2020.

Romance rumors swirled as Sophie Turner and Joe Jonas were first spotted together at the MTV EMAs in November 2016. The duo were then spotted holding hands in Miami the following month.

The lovebirds were then spotted arriving to CAA’s Golden Globes party at Catch LA in December 2016. Since then, they’ve had the best of relationship and are now parents of two.