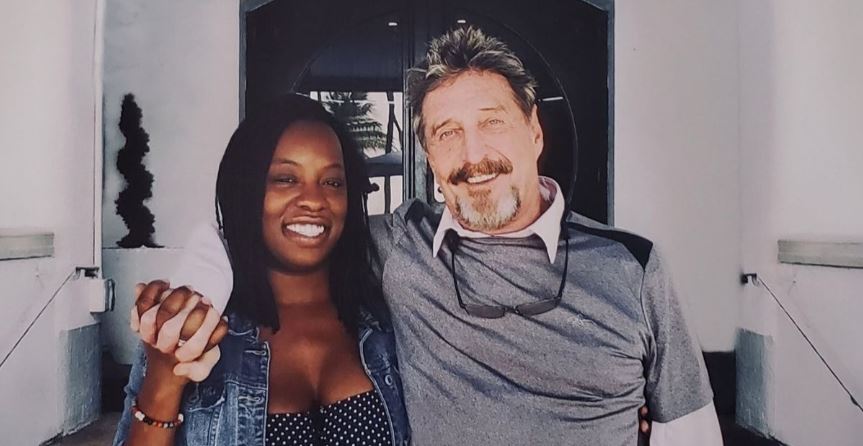 John McAfee’s widow doesn’t believe he committed suicide while his ex-girlfriend also believes he faked his death – Read on to find out more about the late programmer’s love life.

In 1960, when he was 15 years old, John McAfee‘s abusive, alcoholic father shot himself. Because of that, McAfee would plunge headfirst into addiction for several years, while still keeping up his grades in school.

Turns out he had a knack for computers. At the age of 42, McAfee would create the world’s first commercial anti-virus software, which is still in use today. By the mid-1990s McAfee changed his tune entirely about his software, claiming it was bloatware (unnecessary software).

He stepped down as CEO in 1994 and went on to found several less successful companies, finally landing on cryptocurrency.

Unfortunately, in November 2012, he was accused of killing his neighbor while living in Belize. While he managed to avoid prison time for murder, seven years later he was on the run for tax evasion and was eventually caught. However, as he waited to be extradited back to the United States from Spain, he killed himself. Or at least, that’s what people say. McAfee’s wife does not believe it was suicide. Now, his ex-girlfriend is suggesting that McAfee is still alive. Who are his wife and ex-girlfriend? Here’s what we know.

Who is John McAfee’s wife?

John McAfee was many things in his life. He was a party animal, a presidential candidate, and a wildly successful businessman who could barely hold onto his own money. At one point he even claimed that if cryptocurrency didn’t reach the price of $1 million by 2020, he would eat his own d–k. That promise never came to fruition, but one that did was his vow to love his wife Janice McAfee until death does they part.

According to ABC News, McAfee and Janice met in 2012 when he was in Miami after being deported from Guatemala. At the time, McAfee was accused of murdering his neighbor and had been on the run for a month. Janice was a sex worker in Miami who McAfee was paying to spend the night with, but that night turned into marriage. Despite McAfee’s infamously erratic behavior, Janice seemed to ground him. She was 30 years younger than him but appeared to be in charge of their relationship.

Janice told ABC News that McAfee saved her from years of sex trafficking, giving her a new home and meaning in life. She was also able to reconnect with her estranged son, thanks to McAfee. In an interview with 20/20’s Matt Gutman, Janice revealed that McAfee “saw the hurt that was there” (via The Daily Mail). For the first time in a long time, someone saw Janice as a human being instead of a piece of property. It’s that love that has caused Janice to question her late husband’s suicide.

El País reported that on Oct. 3, 2020, McAfee was arrested at the El Prat airport in Spain while attempting to board a plane to Turkey. “The arrest was made after a request from the U.S. justice system, which had accused McAfee of evading millions of dollars in taxes from earnings supposedly obtained from activities such as trading in cryptocurrencies,” said the outlet. Eight months later, McAfee would be found dead in his cell from an apparent suicide.

A separate El País piece confirmed via a preliminary autopsy given to the outlet that McAfee’s death was indeed a suicide. But his wife doesn’t buy this at all. Two weeks after his death, Janice posted a lengthy statement on her Instagram regarding her husband’s suicide. She began by describing the last time they spoke which was the day of his death. The courts recently decided to extradite McAfee back to the United States, but he was determined to fight via an appeal.

“John was a fighter and he had so much more fight left in him. He told me to be strong and not to worry, we would continue to fight all the necessary appeals,” wrote Janice.

She went on to say that she was made aware of his suicide via a Twitter direct message and had no knowledge of a suicide note he apparently left behind. In fact, this note was released to the public before Janice or her attorney had a chance to read it.

Janice tweeted out a copy of the note on July 13, 2021, with the claim that it “does not sound anything like someone who has no hope and is contemplating ending their life. This note sounds like one of John’s tweets.” Janice has also been unable to obtain a copy of the autopsy report, McAfee’s death certificate, or any reports from the Spanish prison where he was being held, per the New York Post.

With all of this going on, it’s no wonder that Janice is working diligently to have an independent autopsy performed. Currently, a Change.org petition is circulating in an effort to get McAfee’s remains released to Janice. Hopefully, she will have some answers soon.

What is Janice McAfee’s net worth?

Being married to one of the most important people in the history of cybersecurity certainly must’ve had its perks, and it appears as though Janice still has a good bit of funds from her time together with John. According to News Times, Janice currently has a net worth of somewhere around $800,000.

Who is John McAfee’s first wife?

Prior to marrying Janice, John tied the knot with another woman. Indeed, John’s first marriage was to Judy McAfee. Little is known about the time that they spent together, but public records show that the two split up all the way back in 2002, over a decade before he tied the knot with Janice.

In a new documentary that hit Netflix on Aug. 24, McAfee’s Belizean ex-girlfriend Samantha Herrera claims that the software mogul faked his own death and is currently living in Texas. “I don’t know if I should say, but two weeks ago, after his death, I got a call from Texas: ‘It’s me, John. I paid off people to pretend that I am dead, but I am not dead,’” she claims.

In the documentary, which is titled Running With the Devil: The Wild World of John McAfee, Herrera claims that McAfee tried to convince her to run away with him.

“’There are only three persons in this world that know I’m still alive,’” she claims he said.

In the documentary, Herrera claims that the two started dating when McAfee was living in San Pedro, Belize, and she was just 18 years old.

The couple fled the country in 2012 after their neighbor, Gregory Faull died under suspicious circumstances. Herrera also connected McAfee with Telésforo Guerra, a prominent lawyer who also happened to be a relative of hers.

“His side of the story is that they’re after him because he didn’t pay off the government. They wanted to hurt him, to get rid of him,” she says in the film.

McAfee eventually returned to the U.S.

After suffering from a heart attack, McAfee eventually managed to successfully return to the U.S., where he ended his relationship with Herrera and married a former prostitute in Miami. Guerra, McAfee’s lawyer, died a year after representing him.

In an interview with Esquire, the film’s director Charlie Russell said he was unsure what to think about Herrera’s claims that McAfee was still alive.

“I don’t know what I think and I don’t think she does,” Russell said during the interview. “She says it, then she looks at the camera, and I can’t work out whether she thinks it’s real or not. She’s someone who was very angry at John.”

“He promised them a life together and I think they were genuinely in love, despite the huge age difference, I think he offered her a real different future, then he literally ditched her at the border and I think that’s very painful for her and it’s taken her years to get over that,” Russell continued.

Prior to his death, McAfee had tweeted that if he was found dead in his jail cell, it wouldn’t be as a result of suicide. Ultimately, Herrera’s claims are the only evidence we have that the former software engineer is still alive.

For more of John McAfee’s wildlife story, watch Running With Devil: The Wild World of John McAfee, which is available to stream on Netflix now.