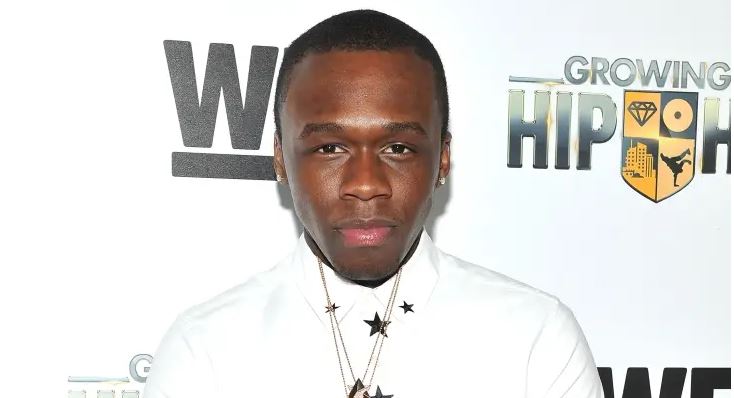 What is Marquise Jackson’s net worth? 50 Cent’s son Marquise continues to apply pressure over child support. Marquise says he will pay his father $6,700 for 24 hours of his time.

For the past few weeks, 50 Cent’s oldest son, Marquise Jackson, has been slamming him over his child support payments. During an interview with Choke No Joke, Marquise explained that the funds provided weren’t nearly enough for his lifestyle.

Following his comments, social media users ridiculed him and labeled him as ungrateful. However, this did not stop Jackson from getting his point across. Earlier today (October 10), he shared an image on Instagram, further targeting his father.

In the picture, he sat on the floor with 100 dollar bills behind him, spelling out the word “entitled.” His caption read, “Since y’all think $6,700 is sooo much money someone tell my pops I will pay him $6,700 for just 24hr of his time so we can do everything I ever wanted to do with him as a kid [stop light emoji] Red Yellow Green whatever color he like.”

As of now, 50, whose real name is Curtis James Jackson III, has not responded to his son on social media. This comes as a surprise to many people, as the Power producer is known for calling people out on his platforms.

What is Marquise Jackson’s net worth?

Marquise Jackson’s exact net worth is not available to the public, however, his estimated fortune is around $1 million.

As of October 2022, Marquise’s father, 50 Cent’s net worth is estimated to be $40 Million. American rapper and businessman 50 Cent has earned over $250 million throughout his career from chart-topping albums and singles, as well as other business ventures.

Marquise Jackson is known for his role in Dope King and Dope Fiend (2017) but best know as the eldest son of 50 Cent. Marquise Jackson is 50 Cent’s 25-year-old son with Shaniqua Tompkins. Back in 2018, he started his own rap career with his debut single Different.