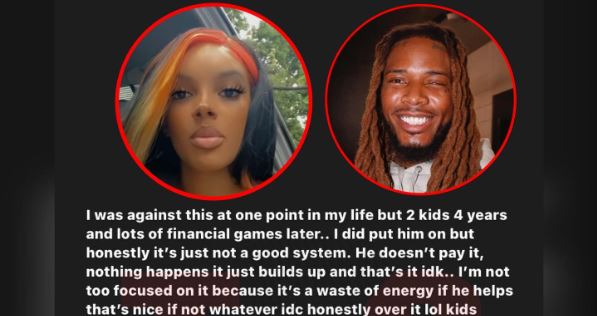 Lezhae Keona says that asking Fetty Wap to pay child support would be useless because he wouldn’t go through with paying it.

Lezhae Keona responded to an anonymous question on her Instagram Story, earlier this week, regarding her decision not to seek child support from Fetty Wap. She says that the rapper would not follow through with paying it and the debt would continuously pile up, making the ordeal a waste of her energy.

“Why don’t you take fetty to child support it’s unfair you have to financially take care of your kids alone,” the question read. “Make him pay!!!!”

Keona responded: “I was against this at one point in my life but 2 kids 4 years and lots of financial games later.. I did put him on but honestly, it’s just not a good system. He doesn’t pay it, nothing happens it just builds up and that’s it idk.”

She continued: “I’m not too focused on it because it’s a waste of energy if he helps that’s nice if not whatever idc honestly over it lol kids gotta eat everyday regardless I brought them here no point in wasting energy arguing about who feedin them when ima do it at the end of the day regardless.”

Fetty Wap is the father to two of Keona’s children. Zaviera was born in 2015 while Zy was born in 2018. In total, Fetty is the father of six children with five women. In July 2021, his daughter, Lauren, died at the age of four, reportedly due to congenital heart arrhythmia.

Check out Keona’s post below as shared by The Shade Room below.