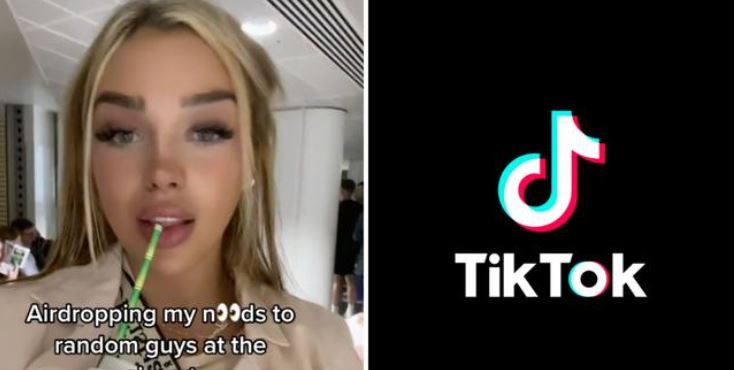 A TikToker and model sparked backlash after sharing a video of her AirDropping naked photos to strangers at an airport.

Content creator and OnlyFans model Alaska Clarke went viral with more than 3.7 million views when she told her followers that she had sent her nude photos to people around her through AirDrop at an airport.

“AirDropping my [nudes] to random guys at the airport,” text over the video read, as the blonde model was seen waiting to board a plane with her friends.

After panning the camera toward groups of travelers behind her, she smiled and jokingly added that sending nudes to random men is how she “shoots her shot.”

While the six-second clip garnered over 400,000 likes, TikTok users slammed the model for sending unsolicited nudes to strangers.

Many TikTok users thought Alaska’s idea of picking up guys was “sexual harassment,” and were worried that a child could’ve received the naked photos.

“There’s literally children and married people there,” one user commented. “Very very illegal, but even if it’s a joke, it’s so desperate it’s sad,” another added.

“Some five-year-old with an iPad in the airport about to be traumatized,” a third user wrote.

“That’s sexual assault isn’t it,” a fourth noted. “That’s how you end up in jail,” someone else shared.

One user left a comment asking the model, “do you actually not get embarrassed or anything or is it just normal now genuine question.” Alaska responded, “Nope (genuine answer.)”

This isn’t the first time that someone has gone viral on TikTok after AirDropping nudes to strangers. Last month, an airplane passenger AirDropped unsolicited nudes to random women on the plane, which resulted in the pilot threatening to stop the flight.