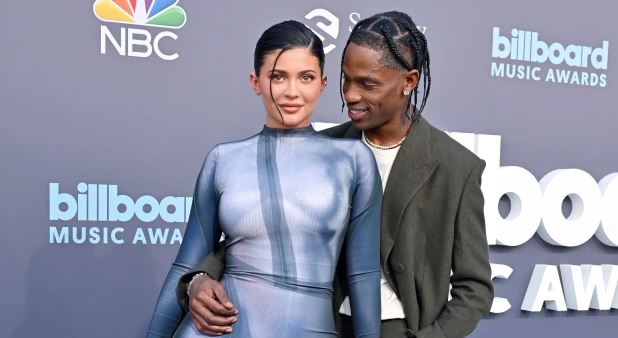 Kylie Jenner’s baby daddy Travis Scott posts then delete an unedited photo of the star’s body while she cooks for the rapper on Father’s Day.

Travis, 31, boasted about his partner’s cooking skills in a deleted Instagram Story, which later resurfaced online.

In the snapshot, Kylie, 24, appeared to be perking up her booty while standing in front of the stove.

The Keeping Up With The Kardashians alum wore a white sleeveless blouse and rainbow-themed pants.

Kylie also tied her long brunette hair into a ponytail.

She held a plate in one hand and a cooking utensil in the other.

The TV star might have been unaware that Travis was taking a photo of her post-baby body.

On the surface of the white table, there was a bowl of fruit, an upside-down Ketchup bottle, and a bottle of Rob Kardashian‘s Grandeza Hot Sauce.

Travis wrote: “Shawty in here throwing that sh*t down!”

It is unclear if the cooked meal that Kylie made was meant to be eaten by her baby daddy or their two children.

The Kardashians star celebrated Father’s Day with an adorable photo on Instagram.

The hitmaker lay on the giant bed with their two children.

Their 4-year-old daughter Stormi seemed to be asleep as she wrapped herself under the bed covers.

In the sweet photo, Travis appeared to be juggling his eating habits while cradling his second child.

Travis had a mouthful of noodles while holding a fork in one hand.

His other arm was pressed against the infant’s back as his hand was holding onto the black bowl.

The mom of two blocked the toddler’s face with a brown heart emoji.

Back in February, the Hulu star welcomed the baby boy with the rap star.

The couple has not announced the name of Stormi’s baby brother.