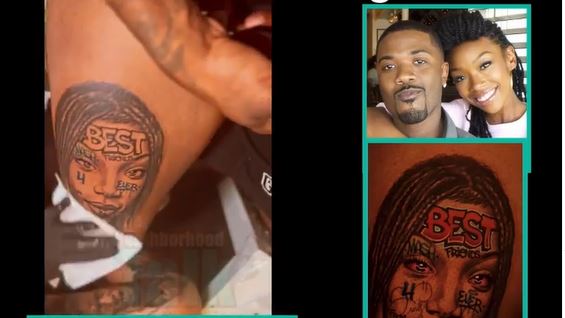 Ray J gets a fresh tattoo on his leg. The new ink shows Brandy’s face covered in tattoos and is apparently the beginning of “The Holy Leg.”

The unbreakable bond between Ray J and his equally as famous sister Brandy is a sibling love that surpasses understanding. Most, if not all siblings are known for their bickering and fighting, but Ray and Brandy have presented themselves to be nothing but the best of friends.

They starred on television together, featured one another in their music videos, and stick up for each other when one may be involved in a controversial story. Brandy even playfully—yet, seriously—teased her brother over his Verzuz performance, noting that she gave him a to-do list to help with his vocals.

We’re not sure how dedicated you are to your sibling, but Ray J recently showed off his new tattoo in tribute to his sister. It’s not what anyone expected, but his fans weren’t surprised.

Ray uploaded a video that showed him in the tattooist’s chair as he received his new ink. As Brandy’s 1994 hit “Best Friend” played in the background, Ray J displayed the large portrait of his sister with several face tattoos.

“NEW @brandy TATOO BY ONE OF THE GREATEST!! @_mashkow_ ,” he wrote in the caption. “IM GETTING MY WHOLE LEG TATTED WITH- MUSIC- LOVE – SCRIPTURES – THE VOCAL BIBLE – FAMILY – GHOSTS – POSITIVE WORDS AND THEMES – REAL GOTHIC LIKE — ‘THE HOLY LEG! ‘ – GONNA TAKE A MINUTE!! But I got the best doing it !! STAY TUNED!! – FULL LEG TATT — I had to start with my best friend!!”

Brandy hopped in the comments with a reaction: “Brooooooo[black heart emojis].” It’s certainly a work of art, so check out Ray J’s new Brandy tattoo below.