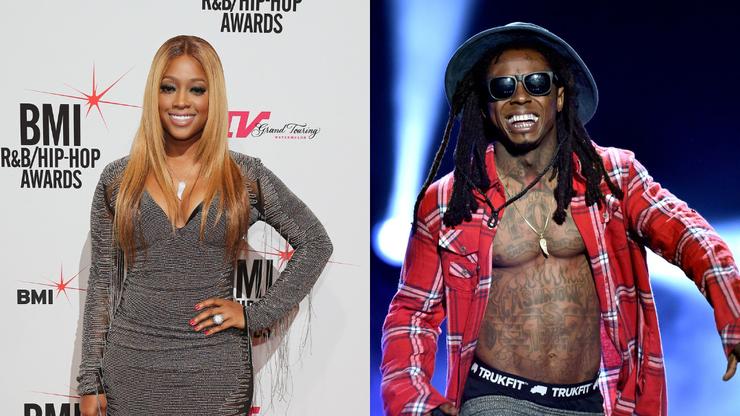 Trina labeled Lil Wayne a “legend” when asked about their past relationship and said that he’s “one of the most honest guys I’ve ever been around.”

Trina praised her ex, Lil Wayne, when asked about her relationship with the rapper on the latest episode of Drink Champs. Trina says that Wayne is “one of the most honest guys I’ve ever been around.”

Wayne and Trina began dating in 2005 and eventually got engaged before splitting things off in 2007. To this day, Trina says that Wayne has also been a “great person” to her.

She continued: “Back in the day, just from our situation, we were just young. You know sometimes when you’re young, this industry is just fast. It just doesn’t work out the way you plan or how you think it’s going to work out. You’re 20-something years old, you’re hot in the game, making so much money all over the place.”

“Wayne is one of the most honest guys I’ve ever been around or met,” Trina added. “When I say honest, like, a real honest person. He’s not with the games. That’s not him. … To me, I’m always gonna speak positively of him.”

Also, in 2017, Trina spoke about her past relationship with Lil Wayne. The two dated back in 2005 and ended things a year later. As Trina explained in her interview, she felt that age was the biggest hurdle to overcome during their time together. “Wayne is a very great person,” she said.

Trina was in an on-again, off-again relationship with rapper Lil Wayne from 2005 to 2007. On October 5, 2005, during an interview with Wendy Williams, she confirmed that she and Wayne were engaged to be married. Trina later became pregnant by Lil Wayne but suffered a miscarriage.

Despite her relationship with Wayne not working out, she recently became engaged to Raymond Taylor, a rapper who goes by the name Ray Almighty. They’ve been dating since 2017 and got engaged in September 2021.

Check out Trina’s appearance on Drink Champs below.