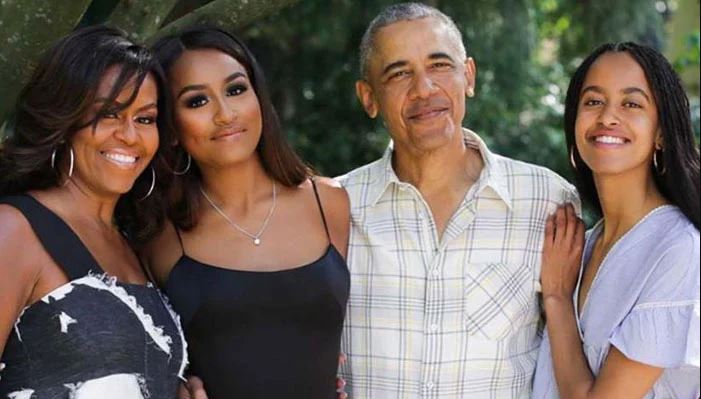 Want to know where Malia and Sasha Obama are and what they’ve been up to? Read on to find out what they do and more about their private lives.

After leaving the White House, the Obama sisters stayed out of the spotlight but now have “real lives,” according to their mother.

What did Barack Obama say about Sasha and Malia running for office?

“What would you think or what advice would you give if Sasha or Malia ever came to you and said ‘I want to go into public service?'” James asked Barack at the time.

He replied: “First of all, them as teenagers – having secret service guys follow them when they were going out on dates – I think has probably shut down their interest in public service.

“They still have PTSD from guys talking into their wrist microphones and glasses as they try to go to a music concert.”

The former president went on to say that being in public service, you have to have a certain tolerance for nonsense, silliness, and meanness.

“As a father, I want to protect my girls from that stuff,” he said.

“I think they are probably going to find other ways to serve, rather than run for office themselves.”

While the Obama sisters have not shown an interest in public service, Barack told the late-night host that “you never know.”

Clifton Ray Jr was born May 23, 1997, and was raised in Ladera Heights, California.

He is a former college basketball player who’s now in the television industry directing commercials for brands such as Nike and Peloton.

His dad is actor Clifton Powell who has appeared in films, such as ‘Ray’, ‘Dead Presidents’, ‘Rush Hour’ and ‘Next Friday’.

His mom Kimberly has her own business ventures while his sister, Maya, 29, runs a nail art company.

Who has Sasha Obama dated before?

Who is Malia Obama dating now?

Malia Obama began attending Harvard University in the fall of 2017. According to W Magazine, Obama had the gap year many college students could only dream of. She partied in Amsterdam, attended Lollapalooza in Chicago, and began her internship in New York City at Weinstein Company — thankfully now no longer run by Harvey Weinstein himself. Obama has also been spotted at clubs and hitting the streets of New York City with her bodyguards in tow. Though with her confidence and height of over six feet tall, Obama could probably handle her own!

As a student at Harvard University, where she enrolled in the fall of 2017 after that epic gap year, Obama got to know her classmates — and the city of Cambridge — a bit better. After a couple of months of getting used to Harvard life, pictures of Obama with a mystery man began to surface, which begs the question — just who is this guy?

The Harvard-Yale football rivalry has been ongoing since the first game (then a rugby match) in 1875 when Harvard beat Yale 4-0. It is still widely celebrated each year on the date of the annual football game, by students and alumni from both schools the world over. So of course Obama got in on the Harvard-Yale action, and she wasn’t alone.

Shortly before Thanksgiving in 2017, TMZ released a video of Malia Obama briefly locking lips with someone while tailgating her very first Harvard-Yale football game. That’s one way to kick off a game.

What does President Obama think about his daughters dating?

In the past, President Obama has discussed his thoughts about his daughters growing up and dating. When asked in a telephone interview by ABC News, “What are you going to do when the girls start dating?” President Obama responded, “Oh … that happened. You know, the truth is I’m pretty relaxed about it.”

Obama continued, “For two reasons, one is Michelle … She’s such a great example of how she carries herself, her self-esteem, not depending on boys to validate how you look or, you know, not letting yourself be judged by anything other than your character and intelligence. And hopefully, I’ve been a good example in terms of how I’ve shown respect to my wife so, I think, I don’t worry about it because they’re really solid smart girls — young ladies now.” Obama then joked, “The other reason is that they’ve had Secret Service. There’s only so much they can do!”

Now that Obama is no longer president, is Malia still protected? The Washington Post explained that, by law, the U.S. Secret Service can offer protection to presidents’ children up to ten years after leaving the White House, though it’s unclear what the former president decided in terms of Malia’s protection. Nevertheless, there’s no doubt that most everyone — including her beau Rory Farquharson — will be looking out for her well-being.