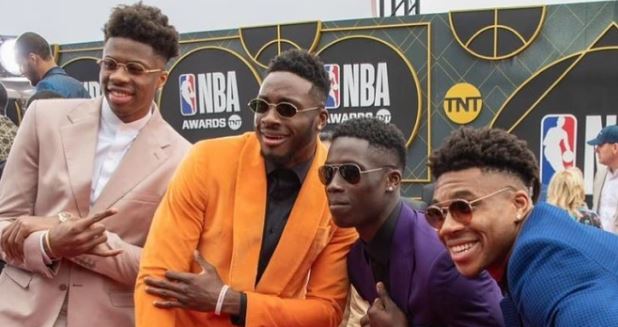 How many Antetokounmpo brothers are there? Here’s everything to know about the NBA siblings.

The NBA player, Giannis was born on 6 December 1994, in Sepolia, Athens, Greece. Giannis’s parents were immigrants from Lagos, Nigeria, who found themselves in Greece after the semi-professional father suffered a career-halting injury while on trial for a club in Germany.

He grew up alongside his four brothers: Thanasis, Francis, Alex, and Kostas, and although the family was poor and lived from hand to mouth, they went through each day with immense love for one another.

The story of Giannis’ family net worth embodies moving from grass to grace because the Milwaukee Bucks player used to be in the deepest of trenches before being drafted to the NBA.

He’s the Milwaukee Bucks superstar who has proved he’s worthy of a place among NBA greats.

But Giannis Antetokounmpo isn’t the only talented basketballer in his family – and soon fans will have a chance to learn more about their journey to success.

How tall is Giannis?

Who are Giannis Antetkounmpo’s brothers?

Milwaukee Bucks’ Giannis Antetokounmpo is one of the NBA’s biggest stars.

The basketball ace comes from a generation of family talent who emigrated to the States from Greece.

Giannis was born as one of five brothers to former Nigerian footballer Charles and former high jumper Veronica.

Mother Veronica gave each of her five sons both Greek and Nigerian names.

Francis is the oldest of Giannis’ brothers and considered the least well known – rarely featuring in family pictures.

Born in Nigeria in 1988, he is the only Antetokounmpo brother not to have started life in Greece.

In 1991, as the Antetokounmpo parents migrated to the Mediterranean, Francis was left in the care of his grandparents.

Following the birth of his younger siblings, he reunited with the family years later.

Francis’s early endeavors in sports were in basketball where he played for a small local club of Filathlitikos as a small forward.

He competed in the club’s senior men’s team in Greece’s semi-pro level of 3rd tier league.

Later in life, she tried his hand at football and featured professionally as a midfielder for a Greek pro club in Greece’s 2nd tier.

He also has a love for music and released his first official single in 2020.

Athanasios Antetokounmpo often referred to as Thanasis, is an NBA player for the Milwaukee Bucks.

Born in Athens on July 18, 1992, a year after his parents migrated to Greece, he is the second oldest brother of the family.

In 2008, he began playing with Filathlitikos junior basketball team, before progressing to the senior men’s team in 2010.

He proved instrumental in helping the franchise gain promotion to the third division in the 2011-2012 season.

After moving to the US, his career took a turn for the better as the Delaware 87ers selected him in the 2013 NBA Development League Draft.

A year later, Antetokounmpo emerged as the 51st overall pick in the 2014 NBA draft by the New York Knicks.

It proved to be the onset of prominence as he was touted by fans as the “Greek Freak.”

He has been playing with the Milwaukee Bucks since 2019.

Born after superstar older brother Giannis in 1997, Kostas currently playing for LDLC ASVEL of the French Betclic Élite and the Euroleague.

After moving to the States with his brothers, he enrolled in Dominican High School and continued his basketball career – leading his team to a state championship in the process.

After high school, Kostas continued to rise through the ranks as he played college basketball at the University of Dayton.

In 2018, Kostas declared for the 2018 NBA draft and was eventually drafted by the Philadelphia 76ers, before being traded to Dallas Mavericks.

He debuted in the NBA on March 20, 2019, in a loss against Portland Trail Blazers.

Kostas was signed to the Los Angeles Lakers later that year and was re-signed in 2020.

Last year, he signed with LDLC ASVEL of the French Betclic Elite and the Euroleague.

Alex is the youngest of the Antetokounmpo brothers and is still in the early stages of his career.

Born in 2001, he moved from Greece to the USA in 2013 before following his older brother to the Milwaukee Bucks.

In May 2020, Antetokounmpo announced that he would veer from the path taken by his brothers – choosing to play in Europe after graduating from high school, rather than play college football.

After taking out the competition, he was signed to an Exhibit 10 contract by the Toronto Raptors but was waived the next day to join the Raptors 905.

What is Disney+ movie Rise about?

Rise is a new Disney Original streaming from June 24.

The movie will explore how the brothers overcame their difficult upbringings in Greece to find NBA success.

IMBD’s movie synopsis explains: “Parents Vera and Charles Antetokounmpo move to Greece from Nigeria for a chance at a better life for their family.

“The couple work hard to provide for their five children, while the reality of deportation from a difficult citizenship system threatens the dreams of their children.

“In order to earn enough money to pay the bills, the family works together to sell souvenirs to tourists in Athens.

“When opportunity arises, the Antetokounmpo brothers take their frustrations to the public basketball courts.

“Individually, they quickly realize that although they have no experience in the sport, they are naturally gifted ball players.

In a Tweet ahead of the movie’s debut, Disney said: “Sons. Brothers. A family of champions.”