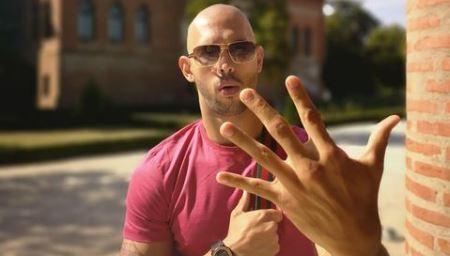 Is Andrew Tate in a relationship and does he have a child? Read for more about cobra Tate’s girlfriend and his family.

Andrew believes that a man should be able to sleep with as many women as he wants, but that does not apply to women. But who is Cobra Tate dating now, is he in a relationship? Here’s all you need to know about Tate’s dating and personal life.

old he fought out of Luton, England, until his retirement.

Is Andrew Tate dating anyone?

Andrew Tate is reportedly in a relationship with Naghel Georgiana Manuela and a report from Mixed Article indicates they’ve been dating for a while.

In February 2020, the kickboxer returned to KO Masters 7 in Bucharest, Romania, where he currently resides with his girlfriend.

On October 21, 2021, Andrew posted pictures with his girlfriend on his Instagram post, sitting on a Jet plane, captioned, “Flying in my Jet with the only woman I trust. Magic powers.”

Andrew and Naghel are unmarried in 2022.

Who are Andrew Tate’s parents?

Andrew, in several interviews, has mentioned being raised by his single mother in England.

According to Wikipedia, his father, Emory Tate, was an American Chessplayer.

The kickboxer has mentioned his mother in several Youtube videos, but he has kept her identity out of sight of the media.

According to online sources, Andrew’s mother was harsh, mean, and bold, unlike other mothers.

How many siblings does Andrew Tate have?

Andrew has two siblings, a brother, and a sister.

His brother, Tristan Tate, is also a kickboxer and K1 Champion.

His sister, Janine Tate, is married and lives in Leeds, England, with her family.

How much is Andrew Tate’s net worth?

According to sources, Andrew’s net worth is around $30 million as of 2022.

Andrew has revealed that even though he is a four-time world champion, Kickboxing didn’t make him rich, and his primary source of wealth is from his companies, including many casinos in Romania.

Besides business, the kickboxer runs YouTube channels, Tate Confidential, Tate Universe, and Trigger Don, where he uploads lifestyle vlogs and podcasts under the name TateSpeech.

Therefore, Andrew earns revenue from Youtube and has close to 2 million combined subscribers.