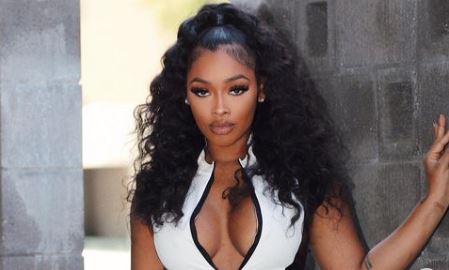 From gaining fame after getting a shoutout in Drake’s song to becoming a famous Instagram-model, Miracle Watts is currently dating Tyler Lepley.

Model Miracle Watts is all set to welcome her first child with boyfriend and actor Tyler Lepley. Watts revealed the news on Instagram and shared a video. The caption reads, “A LOVE STORY.”

The couple recreated a scene from The Notebook where they confessed their love for each other and drove in a convertible. After they parked, Miracle walked out of the car wearing a two-piece yellow crop top and skirt ensemble where she revealed her baby bump.

Who is Miracle Watts?

She was born in Houston, Texas and grew up with a younger brother and a younger sister. She became friends with fellow Instagrammer Dede Damati. In 2015, she became close with August Alsina. She is dating Tyler Lepley.

Born on January 30, 1993, she began her career as an exotic dancer in the Houston club, Dreams. She has been interested in fashion, beauty, and photography since childhood and has previously made a name for herself as a professional twerker.

She is active on Instagram with around two million followers and has 150,000 followers on Twitter. She was previously managed by Facet Studios.

Who is Miracle Watts’ baby father?

Tyler Lepley is the father of Miracle Watts’ baby. Lepley (born March 24, 1987) is an American actor, best known for his portrayal of Benjamin “Benny” Young on the Tyler Perry produced prime time soap opera The Haves and the Have Nots; which is the first scripted television series to air on the Oprah Winfrey Network.

How long have Tyler Lepley and Miracle Watts been together?

Tyler Lepley and Miracle Watts have been together for more than a year. So, how did they first meet?. Miracle Watts and Tyler Lepley confirmed their relationship towards the end of 2021. They were first spotted together in the summer of 2021 and became a fan favorite couple as they continued to appear together on several occasions.