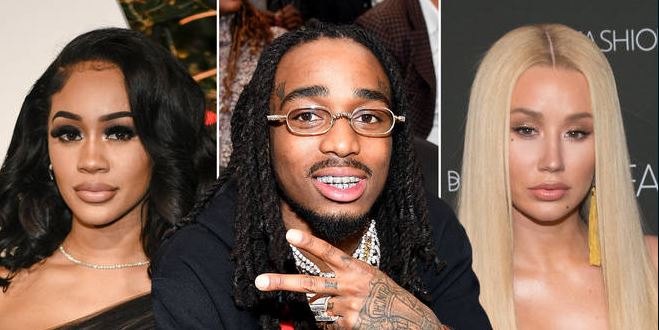 Who used to date Quavo? Does he have a girlfriend and who are his ex-girlfriends? From Saweetie to Karrueche Tran, here’s the Migos rapper’s dating history.

Quavo and Saweetie announced their shock split in March 2021 after three years of dating.

The pair appeared to be going strong until their surprise breakup before the Bay Area starlet insinuated that her former Migos rapper beau had been unfaithful.

So, who did Quavo date before his relationship with Saweetie? The Georgia rapper has been romantically linked to a number of famous faces over the years.

Here’s a comprehensive list of Quavo’s ex-girlfriends. Make sure to read till the end to know who the Migos rapper Quoavo is dating currently.

Earlier this week (March 20) Karrueche shut down the dating rumours that she and Quavo are back together after fans started speculating that the two were a thing after they were spotted together since his break-up with Saweetie. According to The Shade Room, the model confirmed to them that they are not dating.“No, we are not,” Karrueche stated.

In January 2022, Quavo and Karrueche Tran were rumoured to be dating once again after the two were spotted on holiday together in Saint Martin at the beginning of the new year.

The two were seen walking amongst a crowd of their entourage, enjoying the scenic mountain views together.

After the photos started circling Twitter, fans grew suspicious that they may have rekindled their love.

In March, the pair reignited dating rumours after they were spotted out on a dinner date at The Nice Guy Italian restaurant in West Hollywood.

The pair were spotted in public together numerous times during the spring of that year, but neither confirmed the status of their rumoured relationship.

In October 2017, Karrueche denied that the pair were a couple during an appearance on the “Allegedly with Theo Von and Matthew Cole Weiss” podcast.”

No, we’re cool friends, we hung out, but it was nothing serious,” she said of the Migos star.”

For some reason, everybody’s so obsessed, the frickin’ media is obsessed with anytime I’m next to a guy, so it’s been several dudes that they’ve – if I’m seen or [there’s] a rumour, it’s like, ‘Oh my god she’s dating this guy’ or whatever.’ Stay out of my vagina! Nobody’s down there, okay?”

The pair first sparked romance rumours after the Bay Area beauty starred in the music video for Quavo’s song ‘Workin Me’ as his love interest. They were first publicly spotted together in September 2018.

Quavo has previously revealed that he jumped in Saweetie’s Instagram DMs in March 2018 to shoot his shot with a reference to her hit single ‘ICY GRL’.

He messaged her with a snowflake emoji, to which she replied with a bowl of noodles, a reference to the Migos song ‘Stir Fry’. Quavo hit back, “u so icy Ima glacier boy,” before Saweetie replied, “was hannin then.”

The pair seemed to be going strong until their breakup, which Saweetie announced on social media. She insinuated that Quavo had been unfaithful.

Quavo appeared to address the claim, tweeting, “I had love for you and disappointed you did all that. You are not the woman I thought you were. I wish you nothing but the best.”

Prior to his relationship with Saweetie, Quavo was linked to another female rapper thanks to a music video – Iggy Azalea.In late 2017, Quavo and Iggy were reportedly spotted having dinner together at a fancy restaurant. She was also seen attending a Migos concert around the same time.

Months later, Quavo featured on Iggy’s 2018 song ‘Saviour’, and rumours of romance between the pair continued to swirl, but neither have ever confirmed nor denied the speculation.

In an interview later that year, Iggy sang the rapper’s praises. “If I’m being honest, the only people who have been there for me are Quavo, Kesha, and Demi [Lovato],” she explained. “And everyone else has pretty much acted like I don’t exist.”

“He gains nothing for being on the song,” she said when asked whether she thought the Migos was just in it for a quick ‘cash grab’. “Everybody’s probably just like, ‘Oh, but she sucks,’ or ‘Oh, he just did it for money.’ No, he hit me up and we sent music back and forth, and he wanted to do that song.”

Quavo was linked to Burnice Burgos, Instagram model, and owner of sleepwear brand Bold&Beautiful, in early 2018.According to reports, the pair were spotted hanging out together in Los Angeles over All-Star weekend. Bernice was also seen attending one of the Migos’ album release parties for their album Culture II.

Quavo and model Nykkia Harris started dating in 2012. After two years, they became engaged in June 2014. They reportedly split up in September 2014.

Who is Quavo dating now?

Quavo has dated famous faces in the entertainment industry. From models to singers and entrepreneurs. As his current love life, Quavo says he’s focused on himself for the time being and doesn’t plan to jump into any more relationships.

Quavo revealed he is single during his recent GQ cover story interview. Quavo ispoke out about the elevator fight that almost hurt his reputation. In a new cover story for GQ, Migos rapper Quavo looks back on the elevator fight between him and his ex-girlfriend Saweetie that went viral and led social media users to label him an “abuser” as well as where he is in his love life now.

“If I can ever speak on it, I never once in a million years want to do any harm to any woman, period,” he told the outlet when asked about the video.

“I don’t like what people think,” he added later in the conversation, bringing the discussion back to Saweetie. “When they saw the elevator thing they thought it was abusive, something crazy.”

As for his current love life, Quavo says he’s focused on himself for the time being and doesn’t plan to jump into any more relationships.

“I want to establish [myself] as a human being before I step into any more relationships or anything that can steer me off,” he said.

Elsewhere in Quavo’s interview with GQ, he discusses the future of the Migos, his solo career, and more.