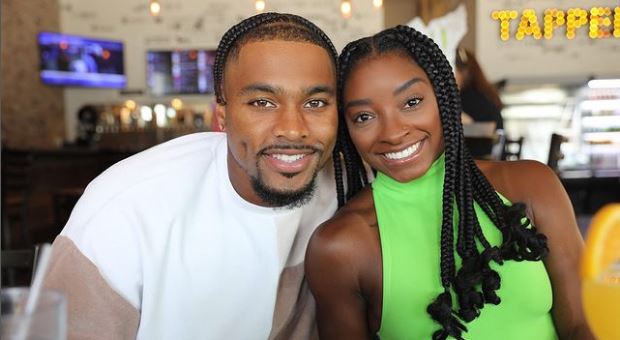 Simone Biles is one of the most decorated American gymnasts who is currently engaged to an NFL star, but does she have an ex?

Renowned gymnast and Olympic medalist Simon Biles is off the market as her wedding is reportedly scheduled for 2023.

The US champion announced her engagement on February 15, 2022, after almost two years of dating NFL star Jonathan Owens.

Since then, the couple has flaunted each other on their social media accounts, this only depicts how strong their relationship is going.

Well, it happened that Simone had a previous relationship with her fellow gymnast but they abruptly ended it before she got engaged to Jowens. So, who did Simone Biles date before and how did she and Jonathan Owens meet?

Who did Simone Biles date before

Legendary gymnast Simone Biles may boast an astonishing six national all-around titles and a record 25 World Championship medals — 19 of which are gold — but her relationship history isn’t nearly as extensive. (TBH, the fact that she manages to find time to date at all is impressive.)

While competing on Dancing With the Stars back in 2017, Simone even told Entertainment Tonight that she hadn’t yet had a real boyfriend. “I have never had a boyfriend in my life,” she told ET‘s Lauren Zima. “At 20 years old I feel like you should have gone through those things and gone on dates. I have been on like, maybe one proper date.”

Things have changed since then, however, and over the years, Simone has had not one but two major romances.

In 2017, Biles began a relationship with Stacey Ervin Jr., who is also a gymnast. After three years of dating, the pair slip up in 2020. That year, Simone announced that she had begun dating professional football player Jonathan Owens.

How did Simone Biles and Jonathan Owens meet and long have they been dating?

Biles has been dating football star Owens since March 2020.

They met through a dating app and got to know each other through the pandemic.

In June 2021, Houston Texans safety Owens told the Texas Monthly: “We ended up hanging out right before the pandemic.

“It was one of the few times in her life where everything was just shut off and she couldn’t do anything.

The football star admitted he didn’t know who Biles was before dating her.

He said: “I just hadn’t heard of her.

“When I told her that, that’s one of the things she liked.”

When did Simone Biles and Jonathan Owens get engaged?

The post, which was accompanied with pictures of the proposal, read: “THE EASIEST YES. I can’t wait to spend forever & ever with you, you’re everything I dreamed of and more! let’s get married FIANCÉ 💍🥺🥲🤎 @jowens_3“

These same pictures were shared on her Twitter page and she gave it a different caption that reads: “WOKE UP A FIANCEE. I can’t wait to spend forever & ever with you, you’re everything I dream of and more! Let’s get married!”

It followed up with a video documentary of how everything went down. In the video which showed the couple in their house with a few friends, Biles’ face was beamed with smiles throughout.

When is Simone Biles getting married?

The Olympic gold medalist and her NFL player fiancee are set to wed in 2023.

Biles is a seven-time Olympic gymnast and went nearly eight years without losing an all-around competition from 2013 to 2021.

Biles has accumulated over 30 Olympic and World Championship medals. She is the most decorated American gymnast and the world’s third most decorated gymnast, behind Belarus’ Vitaly Scherbo, who has 33 total.

Do Simon Biles and Jonathan Owens have children?

The couple doesn’t appear to have any children together or separately. Town and Country mag reports that Biles and Owens have scheduled their official wedding for 2023 after getting engaged in 2022.

The world is yet to hear of the children Biles and Owens will produce in the future.

Speaking about their life as a couple who wants to grow a family together, Simone revealed that “God willing one day, but taking everything one step at a time. Definitely future plans,” she responded on her Instagram Story, adding, “So, I want two kids.

On whether Simone would allow her daughter to join become a gymnast, Simone Biles says “She Wouldn’t Feel Comfortable Letting Her Daughter Do Gymnastics”. Legendary gymnast Simone Biles doesn’t want any future daughter of hers to be involved with USA Gymnastics unless something changes.

Who is Jonathan Owens?

Owens is a safety for the Texans.

The 26-year-old played football at Missouri Western and entered the NFL as an undrafted free agent in 2018.

He first played for the Cardinals and joined the Texans in 2019 and played several games during the 2021 season.