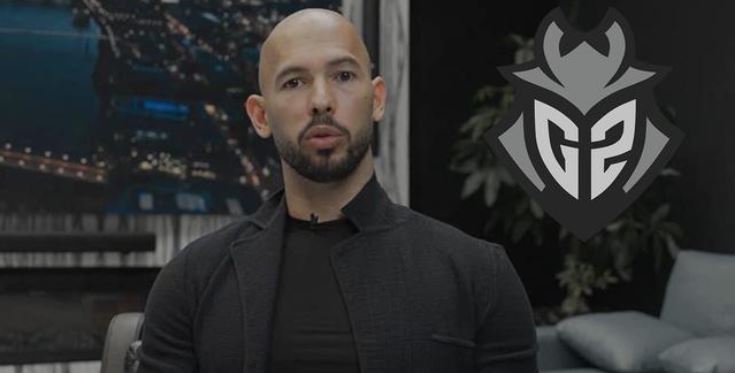 Andrew Tate’s controversial takes were enough to get banned from almost every social platform. Now, the ‘Top G’ has been spotted at a party with G2’s CEO, and G2 fans aren’t happy.

Andrew Tate has been banned from just about every major social media outlet. Not just him, but the name “Andrew Tate” itself. It’s at the point where Apex Legends players are even getting banned for naming themselves after him.

It’s safe to say that Andrew Tate has been de-platformed almost unilaterally due to violating the content policies of almost every social media, something he responded to by flexing his private jet and saying, “I don’t feel very canceled“.

However, de-platforming someone online doesn’t mean they cease to exist. And, in Andrew Tate’s case, he was spotted at a party in a video posted by G2 Esports CEO, Carlos ‘Ocelote’ Santiago.

Andrew Tate is (not) banned from G2 Esports

The video in question shows Andrew Tate lighting a cigar with the sparkler on a champagne glass in a celebration of G2’s recent success as an organization.

Andrew Tate certainly has a track record. Other than his controversial views, there were also allegations that Tate was participating in human trafficking, allegations he vehemently denied on Tucker Carlson’s Fox News show.

This appearance with Tate comes after G2 signed an all-female League of Legends roster, along with the organization having one of the leading female Valorant teams.

G2 esports is one of the frontrunners when it comes to signing female players, something that runs counter to Andrew Tate’s views according to G2 fans angered by Ocelote’s appearance with Tate.

Meanwhile, Tate has been condemned by Trevor ‘Quickshot’ Henry, one of the longest-standing shoutcasters in the LEC (League of Legends European Championship). Both Quickshot and his wife, Becca Henry, spoke out against Andrew Tate’s involvement with a big figure like Ocelote.

Another shoutcaster for the LEC, Marc ‘Caedral’ Lamont voiced his displeasure by simply saying, “f*** andrew tate” in a tweet.

Backlash against Ocelote for his involvement with Andrew Tate has been immense. Carlos has since responded to the backlash with a tweet addressing the issue.

He responded by saying that “nobody will ever be able to police my friendships”, and that he can “party with whoever the f*** I want”.