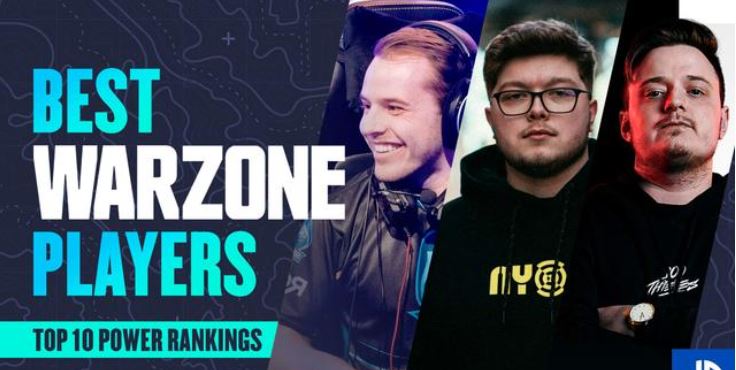 Call of Duty: Warzone’s trip to the Pacific has been a bumpy ride, but a fun one nonetheless. With temporary retirements, the first-ever LAN, and six high-stakes tournaments – here are the best Warzone players.

In June of 2022, it was stated that Call of Duty: Warzone had amassed more than 100 million players. As a free-to-play battle royale title built around one of the most popular FPS franchises, Warzone had had no trouble storming to the top of the charts. Since it was released in March of 2020, Warzone has become increasingly popular, and it has quite literally turned regular gamers into multi-millionaire, championship competitors. We’re here today to look at the industry’s best Warzone players.

It’s a diverse offering, as Warzone rose rapidly to become popular worldwide. It was a period of growth driven by a work-from-home revolution, caused primarily by the COVID-19 pandemic. For a while, it seemed that every gamer on Earth was playing Warzone in some capacity, using the platform as a meeting ground between friends, family, colleagues, and opponents. It became a breeding ground for content creators and cracked players, and it was a game upon which many esports professionals cut their teeth.

Now, we’re going to break down the top-tier gamers and determine which among them can be classed as the best Warzone player in the world.

WELCOME TO THE WARZONE

When it launched in 2020, Warzone was an entirely fresh entry into the battle royale category of games. While it wasn’t Call of Duty’s first attempt at creating a battle royale title, it was by far the most successful. Outside of the typical competitive Call of Duty scene, Warzone is probably the most popular first-person shooter to emerge in recent years.

As a platform, Warzone helped launch the creative careers of countless streamers. It was as though millions of budding creators emerged from the woodwork overnight, providing the wider community with key Warzone tips, tricks, and loadout guides over and over again. You couldn’t move for Warzone content for a while, with the game topping the charts on platforms like Twitch, TikTok, and YouTube.

It became a deeply competitive scene, and several top-tier, professional players rose out of the fray. There are a few Warzone experts that can be considered the best Warzone players in the world, but who are they?

THE BEST WARZONE PLAYERS IN THE WORLD

Some competitors are just built differently. Whether we’re talking about their ability to win millions of dollars or outclass their opponents in almost every way, there’s something special about the best competitors. In Warzone, being the best player truly means something, and it’s how you get noticed as both a creator and a competitor.

Without further ado, here’s the list of the best Warzone players in the world in 2022.

Without a doubt, Aydan is one of the most electric and iconic creators in the Warzone space. He’s a gifted player who has secured more than $560k in esports earnings, the vast majority of which has come from multiple appearances in top-tier Warzone competitions. Few players with better thumbs than Aydan consistently produce some of the most awe-inspiring content the community has ever seen.

He made his start on Fortnite, and while he still competes on that title, Warzone has well and truly become his home. There’s no question – Aydan is a frontrunner for the title of the best Warzone player in the world. He’s currently signed by the New York Subliners as a content creator and a Warzone player, giving further credence to his abilities. With Aydan’s abilities on the sticks, he’s one of the best resources when it comes to Warzone pro settings.

Hailing from the United Kingdom, Tommey is considered by many to be the best Warzone player in the world. He’s a masterful leader and a remarkable player, and as of 2022, he’s the highest-earning competitor in the history of Warzone. As an older player, Tommey has been competing in the esports industry since 2011, and today, he’s a leading content creator and Warzone player for 100 Thieves, one of the most valuable organisations in esports.

Tommey is a Call of Duty legend, having earned more than $360k through Warzone alone and a further $200k across almost every other title in the history of the franchise. If you want to get better at Warzone, it’s well worth watching Tommey and learning from his incredible in-game skills.

As one of the only top-tier Call of Duty League competitors to find huge success in Warzone, Scump occupies a relatively unique spot on this list. In 2021, Scump took part in the World Series of Warzone, the official esports tournament for the title. He competed against an entire lobby of cracked, prolific Warzone competitors and creators, fighting it out for a $100k grand prize. It was an intense tournament, and Scump managed to secure the top spot, snatching the victory out from under Aydan in the final seconds of the match.

Scump is easily one of the best Call of Duty players of all time, and he’s one of the winningest competitors the esports industry has ever seen. His legacy stretches back more than a decade; by 2022, he’d amassed more than $1.1 million in earnings from his prestigious esports career.

As Tommey’s duo, Almond has proven himself time and again as one of the best Warzone players in the world. He’s a remarkable player with nearly unparalleled game sense and map knowledge, and his movement skills are incredible. Like many other Warzone creators, Almond was a completely unknown player before the game launched in 2020, and it was through Warzone that he became famous.

By 2022, Almond had racked up more than $335k in earnings, been signed to Minnesota Rokkr as a creator, and placed first in a whopping 49 tournaments. There can be no doubt that he’s a forerunner for the pole position in the Warzone stakes. Even when people claimed that Warzone is dying, Almond remained resolute and at the top of his game.

For HusKerrs, 2020 and 2021 proved to be two remarkable years, with the creator finding his feet and amassing a huge following through Warzone. While he made his start in Apex Legends, it was in Warzone that HusKerrs became a legendary competitor, going on to win a massive $309k through Warzone tournaments. He has competed under multiple banners, including Luminosity, NRG, and Team SoloMid, and he’s considered as one of the most inspiring leaders in the space.

At the World Series of Warzone, HusKerrs was an integral part of the competition, securing the top spot in the NA Duos category. Alongside Newbz, HusKerrs secured one of the biggest prizes in the entire tournament, establishing himself as one of the best Warzone players in the world.

Speaking of the devil, Newbz has had quite the run in the Pacific. In Trios specifically, the TBE trifecta of Tom (Tommey), Ben (Almond), and Edy (Newbz) have mostly laid waste to Caldera.

Having placed 1st in both the UFC Invitational and FaZe Pursuit, Newbz has been up to no good. While he, and his trio, settled in at 7th in the RealChain event, he and HusKerrs did place at an above-average 6th in the WonderLAN. He’s been the picture of consistency and it should surprise no one that TBE claims one of the best warzone players.

While he’s been on the precipice of cracking the top 10 a number of times, zSmit is finally exiting honorable mention territory. In December, those 1st-, 2nd-, and 6th-place finishes were enough to raise eyebrows.

Smit also put the scene on notice during Code Red’s tournament, though, as he finished in the top 6 while playing with a new teammate, iSmixie. The Jersey Devil has stormed into the prize money as one of Pacific’s walking highlight reels.

It is no exaggeration to say that Stukawaki is slept on. In fact, he nearly missed a spot on this list until I double-checked December’s data.

Stu deserves his credit, though. Not only did he place 6th (UFC $25K) and 1st (NOS $40K) with zSmit and zColorss, he also went ahead and placed 2nd in the FaZe $100K while playing with a different trio (Slacked and Xamzah). Absolutely massive month out of the menace.

The Toxic Terror makes his return to Warzone’s top 10 in Pacific’s first month. A menace on the map and the timeline, ScummN talks a lot, but most certainly backed it up in December.

As mentioned, Scum and UnRationaL placed 2nd in the UFC Invitational and 1st in the RealChain tournament. Without UnRationaL, though, he also took 3rd with HusKerrs during the CodeRed event. Face cam Scummy has been hitting differently.

UnRationaL may be overlooked by some, but he’s been one of Warzone’s most consistent performers for as long as I can remember. In December, that work paid off – as he played into the money in multiple events.

Taking 1st in the RealChain event and 2nd in the UFC Invitational may have been enough to earn a spot in the top 10. The cherry on top was his top-10 finish on LAN, despite playing with a new teammate (CDL assistant coach x2Pac_ThuGLorD).

Back in August, Colors was a little salty on stream after being left off the top 10 despite some late-month tournament wins. At the time, others had performed in bigger events, but he’s absolutely earned his seat at the table in the Pacific.

Settling into a nice groove alongside zSmit and Stukawaki, Colors has been on a bit of a rampage. He placed 6th in the UFC Invitational, 1st in the $40K NOS tournament, and 2nd in the $20K RealChain event.

While some of the game’s biggest players didn’t participate in those last two tourneys, you don’t get to choose who you play. You only get to choose how you play and, in December, Colors was a force.

When you watch Biffle play, it’s obvious he’s a top-10 player – if not the best overall. He proved that on LAN, too, pulling off an incredible 1v2 against the game’s best to secure 2nd place at the historic $100K Baka WonderLAN.

The problem is… Biff’s other December placements just don’t stand up to snuff. He finished 18th in the $100K FaZe Pursuit and 27th in the $25K BoomTV UFC Invitational. The LAN heroics were enough to get Biff into the top 10, but limited participation and inconsistency hold his ranking back.