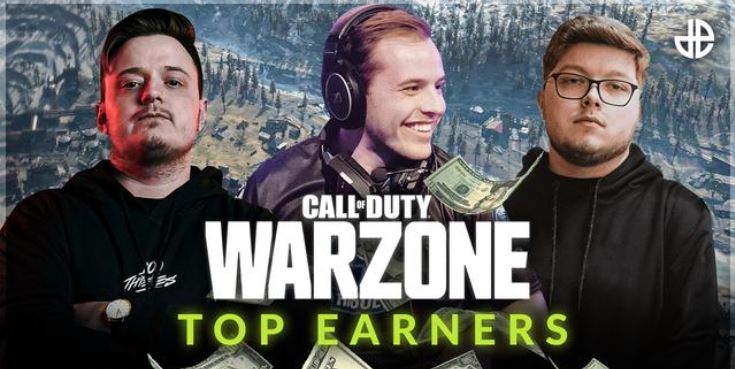 As the Warzone scene continues to keep the ball rolling with major tournaments each and every month, the best pros continue to pile up their winnings. Here’s a full look at the top 20 highest-earning Warzone players.

With a multitude of high-paying tournaments every month since the game‘s March 2020 debut, select Warzone players have stood out from the pack, making themselves the highest-earners and taking home an impressive amount of prize winnings.

We’ve seen incredible new world records set, a host of celebrities get involved, and a variety of high-stakes, big-bucks tournaments to line pockets.

It may not feel as legitimized as BR esports like Apex Legends and Fortnite, but competitive Warzone continues to overcome cheater drama and the absence of a transparent SBMM system (or ranked league) to stay around the top of Twitch’s viewership every week.

Warzone’s competitive scene continues to grow, with no sign of slowing down.

Using data from warzoneearnings.com, let’s take a look at the top 20 Warzone players in terms of overall tournament winnings.

We’ll take a more in-depth look at the top 3, and then provide a full list of the top 20.

In second place for much of Warzone’s first year, Aydan finally eclipsed HusKerrs and took the first spot back on March 14. While he was the first pro to pass the $300K mark in Warzone earnings, he soon slipped to second place once again as Tommey began to dominate, then third as Almond narrowly passed him by in 2022.

From Fortnite to Warzone, Aydan has been a longstanding figure in the battle royale sphere. But, for those unfamiliar with Epic Games’ third-person shooter, the charming beatboxer truly made his mark on Verdansk by proving that his head is worth appreciating for more than its infamous dent.

An absolute demon, Aydan has comfortably shifted from duos with MuTeX and ZLaner to winning a ton of tournaments with Rated. His top-tier performances have continued into Caldera as well, keeping him well above all but one other player on the highest-earners list.

Breaking into the top three in 2022 is none other than Minnesota ROKKR’s star streamer Almond. Having remained among the top three highest-earners for much of Warzone’s first few years, HusKerrs was replaced by Almond shortly after the introduction of Caldera. Shortly after, Almond pushed into second place as he passed above Aydan.

Alongside Tommey and Newbz of the TBE crew, Almond has mostly dominated Warzone tournaments since Caldera launched. The Trio quickly became a force to be reckoned with on the Pacific-era map, kickstarting the new chapter with a lengthy win streak across both custom lobby and kill-race events.

As a former competitive CoD pro, Thomas ‘Tommey’ Trewren was among the first veterans to dive head-first into Warzone upon release. Quickly finding his footing, Tommey has exploded into one of the scene’s biggest personalities and accomplished streamers.

Engaging with just about every tournament since Warzone’s release, Tommey broke into the top three early in 2021. Consistent performances in September saw Tommey then cruise through into second place. The momentum didn’t stop there, however.

After months of impressive finishes and event wins, Tommey managed to earn the number one spot in January 2022 and hasn’t lost the lead since.

The full top 20 highest-earning Warzone players are listed below. In total, across all 20, over $4 million has been earned through Warzone tournaments. And those numbers are sure to increase as prize pools continue to get larger.

With plenty of huge tourneys that continue to be announced, the landscape for the top earners is always right on the precipice of shifting.

Those are the top Warzone earners as of September 2022. Be sure to check back for frequent updates as this list for the highest-earning players continues to change over time.