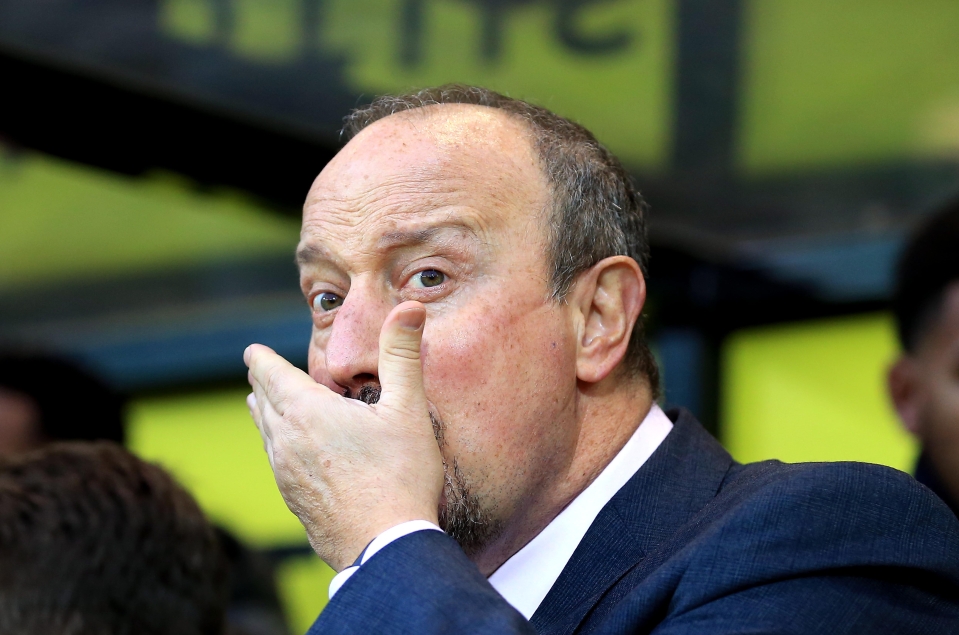 Rafa Benitez’s return to the EL hasn’t been that spot on after encountering defeat upon defeat. The former Liverpool Manager hasn’t convinced the Toffees fans enough to maintain his job, Saturday’s defeat to Norwich raised a lot of doubt on if Rafa Benitez was the right man for the Everton managerial position.

Things haven’t worked out well since the Spaniard took over the managerial position as an Everton boss, to say, Everton is close to the relegation zone on the Epl table just six (6) points from the relegation spot and is 16th on the EPL table. It clearly shows the impatience of the Everton fans with the lack of results and inconsistency of the team as well. Let’s look at some key factors that led to the dismissal of the 61-year-old;

1. The Toffees fans were not pleased with Benitez appointment from the start

The 61-year-old Spaniard has coached their rival opponent Liverpool so the appointment of Benitez came as a surprise to the Toffees fans. With this, it was clear Benitez was not loved by the Everton fans but they allowed him to prove he’s worthy of the position instead he did the opposite of what the fans didn’t expect from him.

Liverpool and Everton will always be rivals so appointing Benitez was a huge mistake from the Everton board as they knew this type of situation normally doesn’t happen in the football world and performance-wise, the team under Spaniard hasn’t been a delight to watch. To say, the fans are a big part of the team so their sentiment matters a lot.

Benitez’s arrival at the start wasn’t that bad because he was now getting to know his players but he managed to win some games at the start. The poor performance started to chip in when the team level of competing started to drop. The ELP is more intricate than any football league in the world, so to let your team compete at the highest level, you would have to be on top of your game to frustrate the opponent.

The Everton we all knew under the likes of Duncan Ferguson, Carlo Ancelotti was not the same team under Rafa Benitez. You could see something was just not right in the team and needed to be solved. Out of 15 games in all competition, the Spaniard managed to W3, D3, and L9 to set the records straight, Benitez had no impact on the Toffees since his appointment in the summer. It clearly shows how bad the team was under the Spaniard.

3. Players not leaving up to expectation under the 61 year old

Players we all knew under the management of Ancelotti that had the football world talking just ceased all of a sudden. The likes of Richarlison de Andrade, Dominic Calvert-Lewin, Jordan Pickford, and others haven’t performed up to expectation. Yes, Calvert-Lewin and Richarlison haven’t been fully fit we all will comprehend that but after these two players gained match fitness what have they brought to their game under the champions league winner Benitez is simple as that.

Richarlison and Calvert-Lewin under Ancelotti were the most impressive duo you would see in the EPL. It was under the reign of the Italian manager that we all saw Calvert-Lewin scoring abilities which even led to him being named in the England squad for their world cup qualifiers. Richarlison on the other hand hasn’t impressed although he is banging in the goals, the qualities the Brazilian possess are above the level he is demonstrating now. Pickford is England’s number one (1) goalkeeper and with the form, Ramsdale is in, Pickford would have to do better to maintain his spot in England’s national team. If Ramsdale keeps putting in the works at Arsenal then Pickford should consider himself to start from the bench in the national team.

4. Not able to get the Toffees to compete at the highest level

For the past few months, the Merseyside team hasn’t performed at the highest level of the game in the EPL, which is troubling for a team with a lot of qualities and can compete for titles in all competitions. Benitez was hired to improve the team and help them compete for titles but letting the likes of Norwich who haven’t won their last 6 games nor scored a goal in their last 6 games as well, clinch all three (3) points at Carrow Road was a big blow for Benitez as Everton coach and I would say he knew his job was in jeopardy after the game.

So if competing against the big teams was a problem, why should the bottom teams also be an issue if you want results, although these bottom teams are tricky to bypass. Everton was not competitive under the reign of Benitez and to compete with the elite teams, they had to decide on the Spaniard future at the club.

As a team, if you are not confident enough on the pitch, trust me there is no way you would bypass the opponent because, in the mind of the opponent, they know everything is achievable in the game. Everton lacked confidence, desire to win games, lack concentration on the field of play, and most importantly being inconsistent. All these attributes mentioned clearly won’t help you win games if you show them on the pitch.

In the ELP which is the best league in the world with the vehemence and belligerence, there is no way focus should be lost in such a competitive league because the moment focus is lost, teams you don’t anticipate to put up superb performance will catch you by surprise

Rafa Benitez’s sacking didn’t come as a surprise and for me, I think it was the right decision from the Everton board to sack Benitez after lousy performances. The main question is, who is going to take over the Everton managerial position if they want to be at their peak again?.