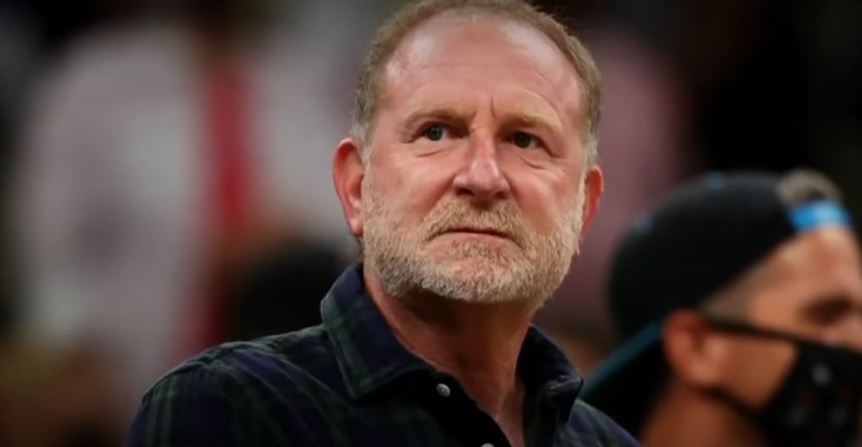 What is Robert Sarver’s net worth? The Phoenix Suns owner has actually built a fortune worth millions over the years.

Disgraced Phoenix Suns owner Robert Sarver had the maximum fine imposed as well as a one-year suspension from the NBA.

Sarver has been under investigation since allegations of misconduct and mistreatment within the organization surfaced in November 2021. He’s clearly a wealthy man, having purchased the Phoenix Suns in 2004 for $401 million.

So what’s his net worth now — and is Sarver really a billionaire?

Robert Sarver’s net worth is close to $1 billion.

Just how much money Sarver has currently is up for a bit of debate. Celebrity Net Worth recently estimated his wealth at a total of $800 million. However, given the seemingly unattainable levels of wealth typical of professional sports team owners, it isn’t surprising that many assume Sarver to be a billionaire.

Although there isn’t official data to back it up, TrueHoop.com called Sarver a “billionaire” in a recent article criticizing the overall culture of the NBA.

Robert Sarver is a businessman and co-founder of real estate company Southwest Value Partner. He is also the owner of the NBA team, Phoenix Suns, the WNBA team Phoenix Mercury, and the Spanish Football Club RCD Mallorca.

What’s the value of the Phoenix Suns as Sarver prepares to sell?

When Sarver purchased the Suns 18 years ago in 2004, he paid a reported $401 million. At the time, it was a record purchase price for a pro team.

According to ESPN.com, Forbes recently estimated the Phoenix Suns’ total value to be $1.8 billion. Sarver isn’t the sole owner but holds approximately one-third of the franchise.

Sarver controls the Suns as well as the WNBA’s Phoenix Mercury but owns just 35 percent of the legal entity that owns those teams. The sale process of the team could be complicated. Potential buyers who want to purchase the entirety of the teams would need to negotiate with fellow owners.

Sarver came under fire due to his repeated use of the “N-word,” inappropriate text messages and photos, and mistreatment of employees. The NBA investigated allegations and spoke to over 100 people who claimed he behaved in ways that “violated applicable standards,” said The New York Times.

Although the dollar amount likely seems like a drop in the bucket to the wealthy Sarver, NBA Commissioner Adam Silver imposed a $10 million fine on the Suns’ owner, the maximum fine allowed.

In addition, Sarver received a one-year suspension from the NBA for his behavior. Many in the sports world, including L.A. Laker LeBron James, criticized Silver for being too lenient with the suspension, which could have been longer. Chris Paul of the Suns called Sarver’s behavior “atrocious” and called for tougher penalties.

Prior to the NBA’s decision on the fine and suspension, pressure mounted from other sources to release Sarver from the job. Jahm Najafi, vice chairman of the Suns and a minority owner, called for Sarver’s resignation. PayPal threatened to pull its sponsorship after the 2022–2023 season if Sarver were reinstated post-suspension.

Sarver expressed remorse and indicated he could have used his one-year suspension to “make amends and remove my personal controversy.” He lamented the “current unforgiving climate” that would make it impossible for him to change his legacy moving forward.

However, now that is selling the franchise, the Phoenix Suns are ready to move forward without Sarver.

“We agree that Robert Sarver’s decision to sell the Suns and Mercury is in the best interest of the organization and community,” the team shared in a statement. “While we are proud of the our progress and the culture and respect and integrity we are building, we know there remains work to do and relationships to rebuild. We are committed to doing so for our staff, players, fans, partners, and this community.”