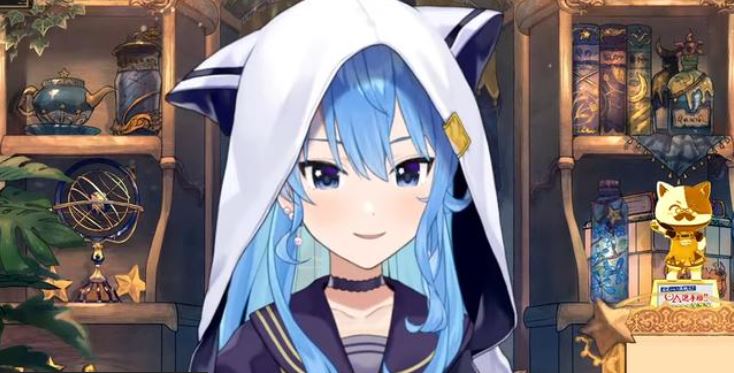 Hololive’s jack-of-all-trades Hoshimachi Suisei is taking a break for 1.5 months for health reasons. The star VTuber spoke openly about throat issues that have been plaguing her all year, and she’s taking some time off to get surgery for it.

Hoshimachi Suisei is one of Hololive’s most beloved talents who can do it all. The self-trained star idol, who grinded from the underground to the top of VTubing, has pushed relentlessly for years to reach stardom.

It caught up to her in 2022 with a little throat issue keeping her from full throttle. With her schedule clearing up though, she’s taking the time to get it fixed and as such will be taking a break from all activities for around 1.5 months.

“My throat’s condition has not been fine for a while and I’ve been going to the hospital and getting a lot of second opinions,” she told fans on September 15, according to a translation. “My nose has recovered ⁠— the inflammation has healed but the swelling is still there and according to the doctor it’s chronic rhinitis.

“We don’t know why there is chronic rhinitis but as a result mucus has been flowing excessively down my throat. Because of that there’s this really thin nodule in my throat ⁠— it really isn’t serious ⁠— but the flowing mucus gets caught.

“Normally the first thing to do is to treat the nose but because it gets caught at the nodule, the conversation went ‘why don’t we remove the nodule?’ ⁠That explains the surgery.”

The star exclaimed it’s been about 9 months since she could sing properly. While it’s not a major issue causing her to lose her voice, it has impacted her performances as of late.

The surgery is low-risk, although there is a chance her voice will change slightly afterwards: “Since my vocal chords will be touched there may be a chance my voice will change but there practically isn’t much risk involved. Please don’t worry about it!

“My voice has changed a lot since I started out [VTubing] so it’s like ‘you’re saying that now?’ I’m fine with anything now. Even my singing voice has changed from before. When the third wave of voice comes in, if it turns into one I can enjoy singing with, I’ll be happy.”

In the interim, Suisei has a few videos planned for fans to keep them occupied while they await her return.

Suisei is not the first Hololive star to go on hiatus due to throat issues. Usada Pekora took a month off earlier in 2022 for the same reason ⁠— although she returned much earlier than the two months off she initially set aside.

Other VTubers like Yuzuki Choco have also talked recently about how breaks have impacted their schedules and work-life balance in a positive way, and Suisei has doubled down on that by assuring fans there’s no reason to worry. In fact, she might not be gone for long.

“I thought of taking a break from streaming but I may stream a couple of times too in that 1.5-month period,” she teased. “I’m curious to see how I can stream without speaking ⁠— I’m not supposed to speak so it’ll be like a challenge stream.

“I won’t be playing Rust on stream but I’m thinking of playing off stream so I may appear on other people’s Rust streams. I’m trying to make it so [I don’t go invisible]. I’m planning to do what I can so let’s meet again soon.”

Is Suisei a guy? How old is Hoshimachi Suisei?

Hoshimachi Suisei is a female Japanese Virtual YouTuber associated with hololive. While originally an independent VTuber who eventually was recruited into hololive, she is currently part of “hololive 0th gen” alongside fellow solo debutants: Tokino Sora, Roboco, Sakura Miko, and AZKi.