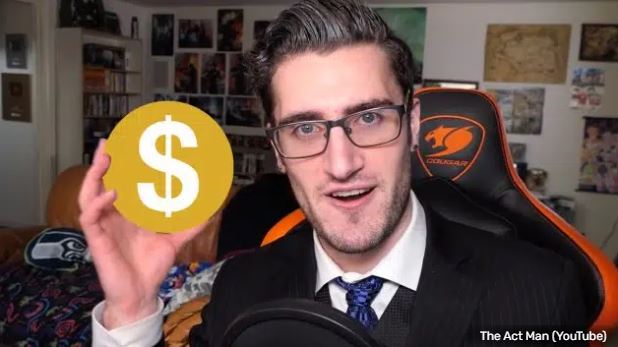 What happened to the Act Man YouTube channel? Why is The Act Man trending? Here’s everything to know.

YouTuber Kelly ‘The Act Man’ Van Achte has had his channel demonetized on YouTube after he criticized the platform for failing to enforce its own community guidelines against creator ‘Quantum TV. The Act Man recently appeared on The Philip DeFranco Show, addressing YouTube’s decision to suspend monetization on his channel following a satirical series of tweets

The Quantum TV vs The Act Man saga began on April 10, 2022, when Act Man uploaded a video titled “The WORST Elden Ring Hot Takes.” In this video, Act Man dissected Quantum TV’s review of the popular RPG Elden Ring in which Q gave the game a 0/10.

Quantum TV then filed a copyright claim and takedown request on the video. This caused The Act Man to launch his own investigation into Quantum TV resulting in a second video titled “Copyright Abuse on YouTube – Featuring Quantum TV” an expose of sorts with the intention of getting Quantum’s channel removed from YouTube.

Fast forward to June 2022, and both creators have released a series of videos regarding the situation. YouTube didn’t punish Quantum TV for abusing its copyright system but has instead taken action against The Act Man.

His recent hour-long video titled “The Dark Days of YouTube” was removed and his channel has been demonetized indefinitely.

On June 8, The Act Man announced that his channel had lost monetization without providing a reason for YouTube’s actions. Various YouTuber’s also reported that mentioning “The Act Man” in the title of their videos resulted in the videos being demonetized.

With content creators and viewers furious with YouTube’s actions, Philip DeFranco used his platform to help clear the air by obtaining a quote from a YouTube rep and presenting it to The Act Man.

“[The demonetization] is connected to a tweet of yours, that has since been deleted, where you threatened to doxx and harass the families of YouTube employees,” DeFranco read. The Act Man went on to describe the tweets to DeFranco before reposting them to Twitter.

Act Man stated that the tweet in question was part of a satirical series of tweets poking fun at the YouTube guidelines he claims Quantum TV violated.

“I pushed the boundaries on the third one. I’ll fully admit that” Act Man stated, “But I did take the tweet down, and I don’t think that anybody thought that was a legitimate threat.”

He went on to discuss how his family was doxxed over a month ago when Quantum TV called The Act Man’s mother. “YouTube took no action against that,” he stated.

The Act Man did state that the tweet was irresponsible and was made out of anger for the lack of action on YouTube’s part. He also stated that he believes there are good people that work at YouTube, but claimed this situation makes the site as a whole look bad.

“I feel like YouTube has made the wrong decision at every point in this,” Act Man shared with DeFrance, “YouTube has had 1,000 opportunities to do the right thing, and at every turn, they’ve chosen the opposite.”

At the end of the story, DeFranco added, “I will say one thing. It does feel like the tweet in question was very obviously a joke and satire.” However, he did touch on an incident at YouTube Headquarters in 2018 where an active shooter wounded three employees, leading to YouTube taking threats against its employees much more seriously.

In an interview with Dexerto, The Act Man was asked whether he thought the demonization of his channel was called for since he openly stated the tweets were “pushing the boundaries.”

“I would very much say that it was unjust because my [YouTube] partner reached out to me and said ‘hey, you should delete the tweet’,” Act Man answered, “And so I did, and I thought that would be the end of it.”

It’s worth noting The Act Man posted the tweet in question on June 6 and deleted it five hours later. His channel was not demonetized until June 8.

“If you add in all the other weird stuff that’s been going on, it feels like something else is happening,” stated Act Man.

In May, another YouTuber Ethan Klein made a satirical bomb threat joke against the NRA on his podcast. Despite receiving a community guideline strike, monetization on the podcast channel remains intact.

“I don’t think he should be demonetized or have his channel taken down for that,” remarked Act Man, “A strike is probably good enough for now for Ethan because those comments were bad.” He went on to state that in both cases, one “mistake” shouldn’t result in being de-platformed.