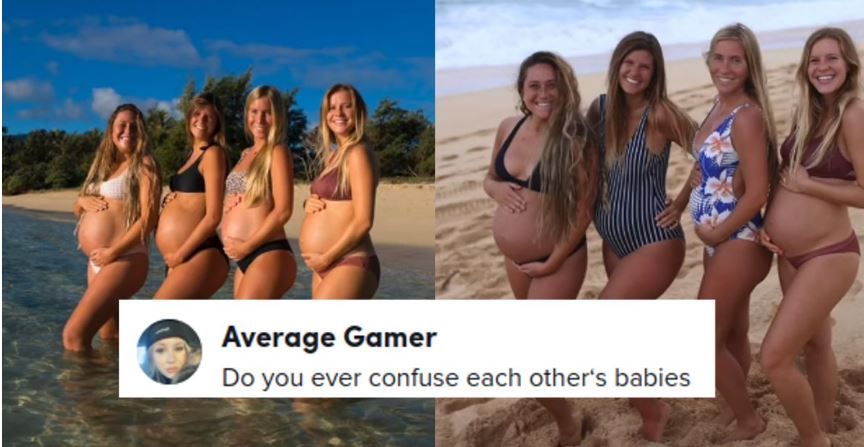 The story of how these 4 best female friends got pregnant at the same time – twice in a roll gained traction on TikTok.

Your kids don’t always follow in your footsteps. Take Tom Hanks for example. America’s Dad ended up giving birth to America’s uncle who isn’t invited to Thanksgiving anymore. Your kids might not like the same things that you do. They might not share the same worldview. You might be a hustler who works their butt off to go after their dreams, and your kid might just want to take it easy and get a sinecure.

Or you might be fine selling wood carvings depicting scenes from The Secret of Nimh and your kid might want to become the next Jeff Bezos. And the same goes for your friends and their kids. Some people may have dreams of their children being besties’ with their own besties’ kids forever and ever, but life doesn’t always pan out that way.

But sometimes they do, and these four moms, who happen to be BFFs, made it pretty darn easy for their kids to all become pals-for-life as they all got pregnant together at the same time, twice. And they all delivered their children within weeks of one another. They delineated the entire experience on TikTok, complete with cute baby/baby bump photos.

TikToker Maddie Castellano, who posts under the handle @maddiecastellano placed a text overlay in the now-viral clip that reads: “4 best friends pregnant at the same time.”

She says in the video, “Some of you might remember the story of how me and my three best friends all got pregnant at the same time.”

She continues, “All of our babies were born within weeks of each other and since birth, they have been best friends. We do so many things together and it’s been so fun that they’ve had little buddies since they were in the womb.”

“Just a little over a year later the same four of us found out we were pregnant and expecting babies within months of each other. Now all of our kids have best friends for life.”

TikTokers were stunned at the synchronicity of their pregnancies. Some remarked that “they are so close they didn’t just sync periods, they synced pregnancies.”

Others thought that their simultaneous pregnancies couldn’t be just chalked up to coincidence and that they were consciously messaging each other in order to try and all get pregnant at the same time.

Multiple people remarked that the kids must all come from the “same baby daddy.”

Others expressed how this is their “dream” for them and their “besties” while others said that they experienced this very same phenomenon but ended up having their heart broken when they realized that their children stopped talking to each other once they got older.

One commenter called it “every mom’s dream.”

Parents intrinsically understand the importance of helping their children socialize. There are tons of resources available with helpful tips on how to do that that don’t involve aligning your pregnancies with your best friends