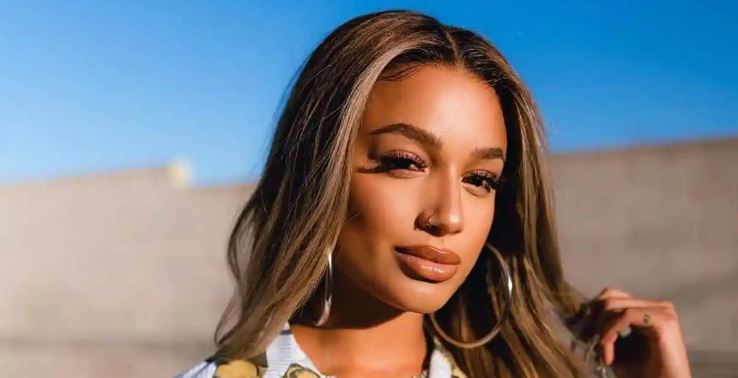 What is DaniLeigh’s net worth? The R&B singer and mother of one has made an impressive fortune from her career.

DaniLeigh is a Dominican-American singer, songwriter, and choreographer. She was sought out by Prince in 2013 to direct and appear in one of his music videos, and she went on to become a contemporary R&B artist.

For folks who have a deep affinity for upcoming R&B singers, DaniLeigh is a popular name. After releasing her 2018 debut album “The Plan,” the Dominican-American singer slowly rose to fame. Since then, she has collaborated with Chris Brown, Queen Naija, Fivio Foreign, and more.

She has made strides in her music career, but some people are familiar with her name due to her ongoing relationship drama with DaBaby. And as a result, fans and social media users alike have been yearning to learn more about her. For starters, what is DaniLeigh’s net worth? Here’s the 4-1-1.

What is DaniLeigh’s net worth?

Since DaniLeigh’s songs “Easy” and “Lil Bebe” have all been certified platinum, fans have expected her net worth to be on the sizable side. And it turns out that she has built an adequate nest egg.

According to WePublishNews, DaniLeigh has accumulated a net worth of $2 million. This figure is a combination of her work as a singer, songwriter, and choreographer.

Amidst the drama, DaBaby also claimed that DaniLeigh’s family had disowned the daughter she had with him. Now, DaniLeigh’s sister Breanna Leah and her mother Vicky Curiel are weighing in to contradict the rapper’s version of events.

“I never wanted to get involved because that’s not the type of person I am but you can never say we ‘disowned’ the baby. I’ve loved her since the day she found out she was pregnant,” Breanna wrote.

“Collecting photos, planning the baby shower (that you didn’t come to), and making sure she was mentally stable without you there,” Breanna continued. “I know my truth and you know yours.”

Vicky also released a statement, and first explained that she didn’t want to weigh into the drama around her daughter until she was sure that everyone was out of harm’s way.

“I didn’t want to address this until I knew my daughter and granddaughter were safe,” Vicky began. “Thank you for your texts, DMs, and phone calls. This is clearly a toxic situation and all we wanted to do was to get her out safely.”

Vicky also said that they were doing their best to make sure DaniLeigh and her daughter were cared for. Breanna, meanwhile, added that it was sad that DaniLeigh’s daughter had to see how terribly DaBaby treated her.

DaniLeigh’s mother and sister weren’t the only ones coming to her defense in the aftermath of the drama. Brandon Bills, who is DaniLeigh’s brother and is also a musician, has called DaBaby out for disrespecting his family.

“Keep my family out ya mouth internet gangsta @Dababy,” Brandon wrote on his Instagram Story. After that, he was spotted in another video challenging the rapper to a one-on-one fight.

The video was shared by DJ Akademiks and features Brandon calling out DaBaby for calling the cops on his sister and “disrespecting my family.” He also says that the feud now has nothing to do with DaBaby and DaniLeigh now. “It’s got to do with me and you,” he says.

Brandon also added that he’s suffering from neck issues because of a recent accident, but he would still be willing to challenge DaBaby.

DaBaby has yet to respond to the challenge, and it’s unclear whether he ever will. Even as DaniLeigh’s family weighs in to defend her, the internet is already taking sides in the conflict between the two of them. DaniLeigh is the one facing criminal charges, but for plenty of people online, it’s DaBaby who deserves to be punished.