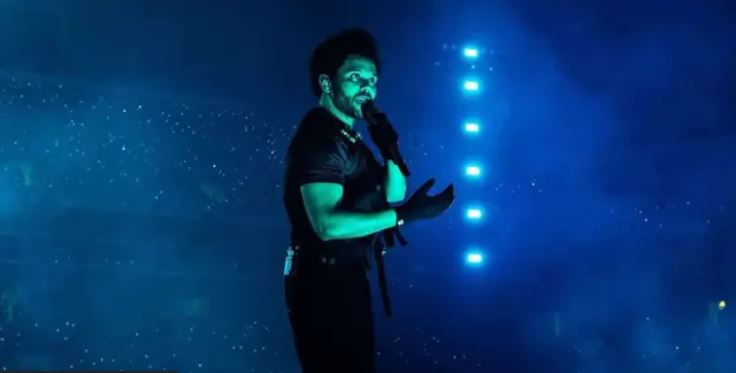 The Weeknd was forced to cancel his concert in Los Angeles’ iconic SoFi Stadium mid-performance after losing his voice.

The ‘Blinding Lights’ singer abruptly stopped his show in Los Angeles, after performing three songs, telling fans he had to cancel the concert after losing his voice in the middle of ‘Can’t Feel My Face.’

The Weeknd walked off stage in the middle of the song, and after the song ended, another started before the lights came up. That’s when he walked back out on stage.

In a viral video, captured by TikTok user nadiasultanx, the singer was seen onstage revealing that he had lost his voice and apologized for having to cancel.

“I’m going to make sure everyone is good, you’ll get your money back,” he told the shocked fans. “But I’ll do a show real soon for you guys.”

Click here if the TikTok video fails to play

The Weeknd added that he wanted to apologize personally, rather than merely share a tweet or post on Instagram. “I can’t give you what I want to give you,” he told the audience, who were both cheering and booing.

He later shared a statement that read: “My voice went out during the first song and I’m devastated. Felt it go and my heart dropped. My deepest apologies to my fans here. I promise I’ll make it up to you with a new date.”

Fans stunned after Weeknd cancels his show after losing his voice

Fans took to the comment section to commend the singer for how he handled the situation.

“That is extremely brave to go out there and do that in front of everyone,” one fan wrote.

“The fact that he actually came out & didn’t just post a tweet is so considerate of him bc celebs don’t really do personal statements like that anymore,” another one added.

Others shared their disappointment in the fans that were booing the Weekend.

“He’s been performing 2 hour concerts back to back since July 14. People who are booing do not understand at all,” one fan commented.

“Poor Abel, he doesn’t deserve the hate he’s getting. It’s literally not his fault that he lost his voice,” someone else shared.

“People booing don’t understand how sore his throat probably is from touring since July. Give the man a break,” a third person added.