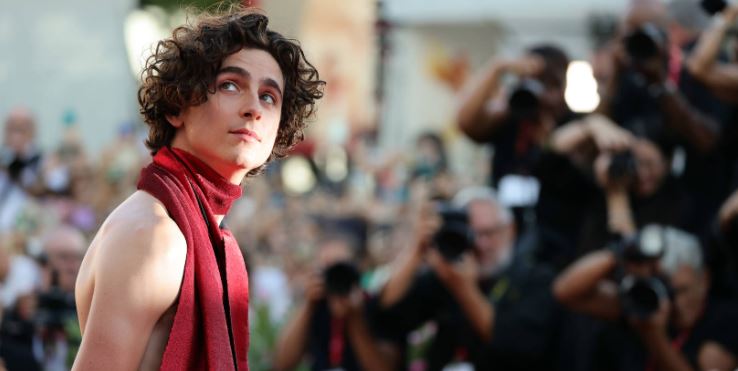 Timothée Chalamet says that it’s “tough to be alive” these days and that he feels that a “societal collapse” is coming. Speaking at the Venice Film Festival to promote his upcoming film, Bones and All, Chalamet spoke candidly about his opinion on the state of the world.

“To be young now, and to be young whenever — I can only speak for my generation — is to be intensely judged,” Chalamet said at the event. “Without casting judgment on that, you can find your tribe there, but I think it’s tough to be alive now.”

He continued: “I think [a] societal collapse is in the air — or it smells like it — and, without being pretentious, that’s why hopefully movies matter, because that’s the role of the artist … to shine a light on what’s going on.”

Bones and All is helmed by Chalamet’s Call Me By Your Name director, Luca Guadagnino. Described as a coming-of-age story, the film will follow two teenage cannibals from Indiana during the Ronald Reagan era in the United States. Chalamet stars opposite Taylor Russell, whose character is searching for her missing father.

Chalamet also made headlines for the outfit he wore on the red carpet at the festival, choosing to rock a red backless halter top and matching slacks.

Check out Chalamet’s comments from the Venice Film Festival below.

What is Timothée Chalamet’s Net Worth and Salary?

Timothée Chalamet is an American actor and model who has a net worth of $20 million, according to Celebrity Net Worth. Timothée Chalamet was paid $9 million to star in “Wonka,” a career-high up that point for the actor.

Chalamet has received numerous honors and accolades over the course of his career, including Academy Award nominations, BAFTA Awards, Golden Globes, and Screen Actors Guild Awards.

Timothée began his career at a young age, appearing in commercials and short films. He then made a name for himself on the series “Homeland” before graduating into film work with his debut role in “Men, Women & Children.” He then appeared in “Interstellar.”

Aside from his acting work, Timothée Chalamet is considered a fashion icon. “Gentleman’s Quarterly” once called him the best-dressed man in the world, and “Vogue” has referred to him as being the most influential man in the fashion world. In 2021, he served as a co-chair at the Met Gala alongside a number of other celebrities.