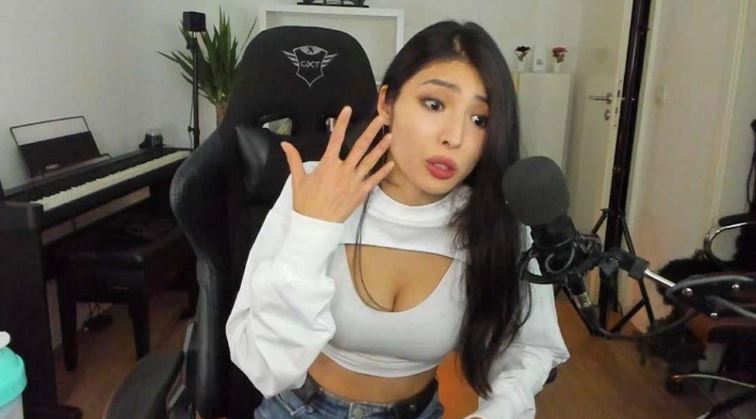 During a live stream, variety streamer ‘Meowko’ spent her broadcast talking with chat, while adding rubber band after rubber band onto a watermelon. The tension in the fruit increased ever so slightly with each rubber band, setting the stream up for an explosive finish.

For those unaware, there’s an internet trend where people use rubber bands to break watermelons. One rubber band barely has any tension, but when stacked with hundreds of rubber bands, they generate enough force to crush the watermelon and send it flying.

While setting up for the watermelon trend, she dismissed concerns. “I don’t think it’ll be that explosive,” she said, expressing skepticism over the trend. Despite stating this, she placed saran wrap over her PC set up in an effort to protect it from the splash damage. Little did she know, however, that saran wrap wouldn’t be enough.

She began the watermelon trend, adding one after another for over an hour. The streamer managed to stack over 220 rubber bands onto the fruit, before the watermelon began to bend, with juices flowing out of its rind. (watch her video here)

“My hand is so tired. It’s super tired,” she complained while placing the last rubber band.

Suddenly, the watermelon exploded causing Meowko to scream, caught completely off guard by the loud explosion. Amazingly, her scream was cut off right as the stream ended. On Twitter, she revealed that the explosion even killed her PC.

Be careful when doing internet trends and challenges, you never know what’ll happen. This sentiment rings especially true when the challenge has you purposefully exploding a watermelon.

Meowko is a social media celebrity from Japan who has gained a lot of attention for her streams online. She is famous on Twitch.

The streamer plays various games such as Hearthstone, Mario Kart 8, Portal 2, and more recently, Among Us.

She often dances and streams various life experiences. On Twitch, Meowko currently has 296k followers. This is in addition to the 67.3k followers on Instagram and a further 4.93k subscribers on YouTube.

Her stream was once interrupted by children who thought she was making obscene videos.

Recently, Meowko was mocked by some kids, who jokingly accused her of making obscene content in front of them.

Twitch streamer “Meowko” was dancing for her viewers in a playground. After a while, a group of children approached her and began talking to the Japanese broadcaster.

They asked her a few questions and then accused her of making pornographic content on the playground. The kids repeatedly accused her of making obscene videos and hassled her into leaving the park. She immediately refuted that statement and appeared quite concerned about what the kids were saying.

In truth, the kids were only trying to mess with her, and one of them was rather blunt about his accusations. “Everybody here thinks that you are doing a p**n-show!”

The streamer got emotional and appeared genuinely concerned. “What? I’m not. I am live streaming. And you shouldn’t even know that word. Ask your mom. I was dancing. I am having fun. I am just having fun dancing. And play basketball!”

However, the kids in question did not let go and repeatedly accused her of making obscene content. What’s more, towards the end, the streamer revealed that they had even been flipping her off.

Considering the situation, the Twitch broadcaster decided to leave the place. Looking at how inconsiderate the kids were to her, Meowko was better served walking off the minute they started talking to her.

Why was Meowko banned on Twitch?

The popular Japanese Twitch streamer Meowko in March 2022 announced that Twitch had decided to celebrate her birthday with an unexpected ban.

Meowko claimed was been banned for “wearing gym clothes” during a cooking stream, questioning the ban email which suggested violative conduct included “wearing a speedo or bikini while cooking.” Fast forward a few months and she has been banned from the platform once again.