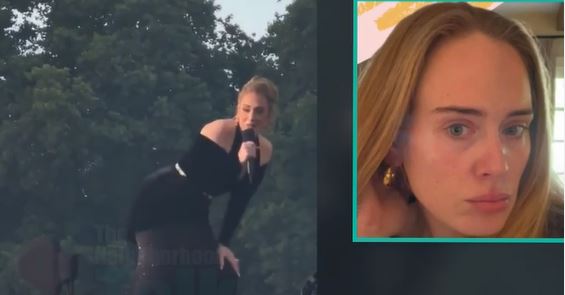 Back in February, Thee Hot Girl Coach named Adele and Rihanna as her dream collaborators.

After taking a few years off from performing for the public on stage, Adele has returned, recently singing songs from her latest album, 30, as well as her other greatest hits at Hyde Park in London.

As Uproxx reports, at one point during her show, the 34-year-old had her audience (and the internet) extra satisfied when she pulled out some of Megan Thee Stallion’s famous “Body” choreography while singing her own 2015 release, “Water Under The Bridge.”

If you remember back to last November, you may have seen endless TikToks floating around online mashing up the Houston native’s booty-shaking dance routine with the English singer’s breakup anthem, even prompting some users to insist that the two artists link up for a collaboration.

A few months later, in February, Thee Stallion named Adele and Rihanna as her dream collaborators during an interview with PEOPLE. “Because I’ve manifested Beyoncé, I feel like I have reached my ultimate goal,” she told the publication.

“Well, I also would really, really really love to collab with Rihanna. Like that is my next dream collab.” At the same time, she added, “If Adele wants me to come [and] get on the track, be the dancer, I’m there! I’m here for it. Somebody tell her to call me because I’m ready!”

After seeing the mother of one pull out some of her dance moves, MTS reacted on Instagram, sharing a Reel of the moment on her Story and writing “Hot Girl Adele” with a series of heart-eye emojis.

While it remains to be seen if we’ll ever actually hear the Hot Girl Coach and her friend from across the pond hop on a track together, we do know that it would be stellar to see – and that the internet remains undefeated at creating iconic mashups.

In another Adele’s perfomance, she was seen clapass as the crowd cheer her up.