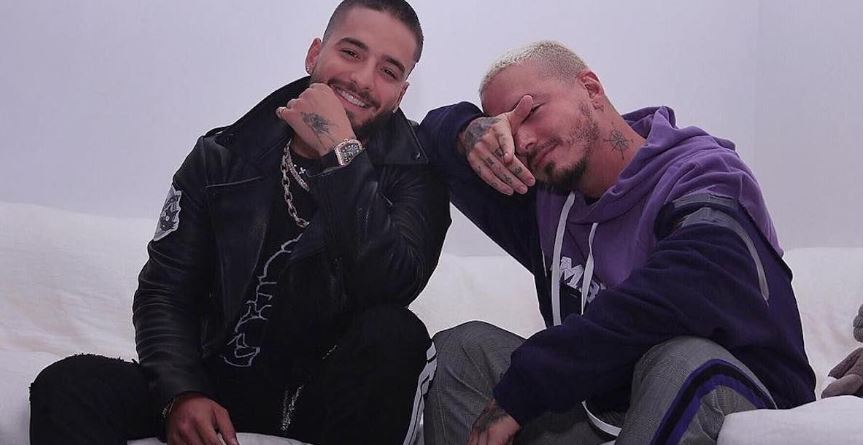 Reggaeton artists Maluma and J Balvin have been seen as “rivals” in the music industry for years. That is until they released their exciting collaboration “Qué Pena” in 2019.

The opening of the video shows the singers poking fun at each other, doing their best-worst impressions of the other into their phones and mirrors. Then, in a moment of solidarity towards the end, the two encouragingly brush off each other’s lapels and peace out.

So, it’s no surprise that fans are convinced that the Medellin natives are linked by more than their musical genes.

“I refuse to believe J Balvin & Maluma aren’t related,” one fan wrote on Twitter before another added that they were ” so shook last night because we both realized that Maluma and J Balvin look related, but they’re not and….. I’m still confused.”

Maluma and J Balvin are not related but they do have a bromance.

Maluma and J Balvin have become fast friends, and their friendship is based on more than one collaboration with each other. Social media is full of photos of them smiling, posing, and enjoying one another’s company.

It appears that they genuinely love and respect each other both as artists, brothers, and “neighbors.”

They also aren’t afraid to tease each other on social media. And when Maluma finally cut his classic, wild hair, a February 2019 video shows Maluma showing off the new haircut and J Balvin saying how he is now safe to introduce to the family.

In fact, the rivalry was entirely media made. This has become more obvious once J Balvin expressed interest in collaborating with Maluma back in 2018.

Maluma, in an interview with GQ, set the record straight.

“I never felt anything bad toward him, but all the attention on the genre and people created this tension between us,” Balvin explained. The two artists finally got to sit and talk to each other about the issue, Maluma telling J Balvin that he has always been a fan of his.

Both Maluma and J Balvin are from the same Colombian city.

As J Balvin sings in his song “Blanco,” both he and Maluma were “For real, made in Medellín.”

Both artists are still staples in their home city. They live there and embrace where they’re from. Maluma has a song dedicated to Medellín and J Balvin, an entire podcast series about growing up, and his start in music titled “Made in Medellin.”

They both feel the same about singing in Spanish.

Maluma and J Balvin unapologetically embrace their language and culture. Despite criticism from producers, audiences, and the American music industry, Maluma, and J Balvin insist on singing in Spanish.

“I want to be recognized in the world as a Latino and as an artist from Colombia who sings in Spanish,” Maluma stated in the same GQ interview. He continues to say that he doesn’t think he has to sing in English for people to enjoy his music.

“Just because you are Latino, does not mean you can’t be global,” J Balvin said in an interview with CNN. People may not understand what his lyrics mean, but they feel it.

The two kings of reggaeton shall reign together.

Although Maluma and J Balvin don’t have any more collaborations planned (that we know about) the fact that they have become friends and enjoy working together gives us hope that we’ll see another one soon.

In the meantime, the non-existent rivalry is over and the two artists are brothers in music.