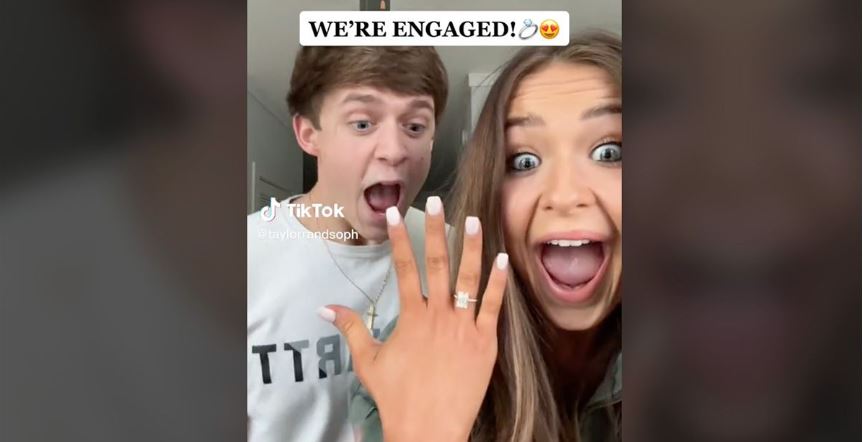 Is Sophia Hill In A Relationship? The TikTok star is engaged to boyfriend Taylor Watts. How old are the TikTok stars?

Fans of Sophia Hill and Taylor Watts are celebrating the news that the two of them recently got engaged. The couple posted the announcement on their TikTok page on Nov. 29, and the comments are filled with people offering their congratulations on the news. Even as fans were eager to offer their thoughts on the engagement, though, some also had some questions about how old Taylor and Sophia are.

How old are Sophia Hill and Taylor Watts?

The exact age of both Taylor and Sophia is something of a mystery, although both are still in their early 20s. While some may think that’s too young to get engaged, it’s worth acknowledging that every relationship is different. Taylor and Sophia clearly think they’re ready to get married, and while that may seem odd to some, it’s not really our place to be too judgy other people’s relationships, especially if no harm is being done.

Fans seem to be over the moon about Sophia Hill and Taylor Watts getting engaged.

While some may have been questioning Taylor and Sophia’s ages, most people are clearly thrilled about their TikTok engagement announcement, at least if the comments under their engagement post are to be believed.

“Awe, I freaking love you guys. Congratulations,” another added.

“Omg, the couple I look up to finally!!!! So many congratulations, love you all!!!!!!” a third person commented.

Taylor and Sophia even posted a follow-up TikTok video in which they shared some additional images from their engagement. It seems like Taylor pulled out all the stops to make the occasion as special as possible, and it clearly had the intended effect. Their relationship has long been inspirational to many on TikTok, and they also have the support of a dedicated community of fans.

Joint TikTok accounts can be dangerous if a couple breaks up, but it seems to be working out well for Taylor and Sophia, who post together under the handle @taylorrandsoph. Although they both appear in almost every video, it seems clear that Sophia is the one who is generating most of the ideas, and the videos are often some form of prank or joke on Taylor.

Even as they have developed a sizable following on TikTok (3.7 million, as of writing), Taylor and Sophia seem to have remained a strong couple in part through their shared love of interacting with their followers. Their engagement is just the latest piece of news that they’ve shared with their followers, and it’s been mixed in with a variety of other content focused on their lives and the silly things they get up to together.

It’s a very wholesome energy, which is what many people seem to appreciate most about them. Now that they’re engaged, most fans are hoping that the good times just keep on rolling on their joint TikTok account, and they’re willing to share some of their lives with their many fans.