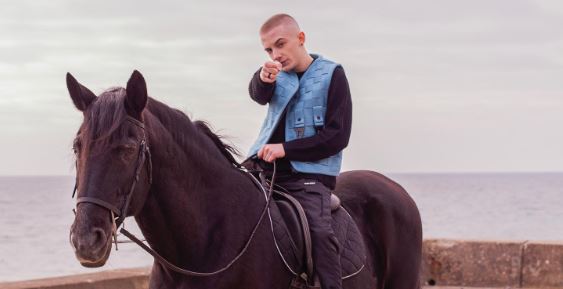 Ever asked yourself who ArrDee is, where he comes from, life before fame, who he is dating now, net worth… Read to the end to find answers to these and more.

ArrDee burst onto the music scene in April 2021 after the release of the chart-topping remix Body, alongside artists Tion Wayne and Russ Millions.

The hit song became an overnight sensation after his verse gained popularity on the social media platform TikTok.

The rapper has hit songs under his belt including ‘Oliver Twist’, ‘Jiggy (Whiz)’, and his feature on another Tion Wayne hit ‘Wid It’. His name first started bubbling in the wider UK music scene after releasing his ‘Cheeky Bars’ freestyle on Mixtape Madness.

For such a young rapper, Brighton’s very own ArrDee has really been making waves for a while. With collaborations with Aitch and Digga D, and an ever-growing body of his own work to back up the hype, ArrDee is really going places in the UK rap scene.

But who is ArrDee? Where is he from? What is his real name? How tall is he? Who is he dating now? Find out everything we know about the rapper below.

The rapper posted a photo of the pair cosied up together in his native Brighton with a red rose emoji and a heart in the caption. His caption was ‘🌹❤️’ (awww).

Brighton rapper ArrDee is 19 years old. The rapper’s birthday is believed to be on September 17th.

ArrDee’s birth sign is a Virgo, according to Astrologers.

What is ArrDee’s real name?

ArrDee’s stage name comes from the initials of his full name: Riley Davies. He was given his stage name by those close to him.

ArrDee is originally from Brighton, UK but he grew up in Woodingdean and often features landmarks from across the city in his music videos.

ArrDee talked to The Face about coming from Brighton. He said he’s “incredibly proud” to call Brighton his home.

He said: “It made me who I am, not just as an artist but as a person. I would say I am comfortable and confident in my own skin, and Brighton I think played a massive part in that.

“It definitely has a massive role to play in my character and in my brand, my music, and everything.”

“I always say it’s the city that never sleeps. There’s always something going on.

“I don’t think I’ll ever leave. Everyone tells me that I will but I like it here. It’s peaceful. It’s easier for me to be about and be viewed as normal. Everyone knows it’s my town. “

Where did ArrDee attend school?

ArrDee’s Instagram account handle is @arrdeegram.The rapper often shares clips of himself freestyling, posing in his premium streetwear brands, and fan reaction videos to his tracks.

After leaving College, Riley said he looked for “odd jobs” to be able to afford mixing tracks and travelling across the south of England to perform at freestyle events

He said: “I worked in a chip shop but that wasn’t really my cup of tea. I’ve done loads of different bits and bobs. I engineered a lot of my own tracks so Cheeky Bars and 6am in Brighton were engineered mostly by me.

What is ArrDee’s net worth?

UK rapper ArrDee has improved so much financially throughout the years. His net worth is estimated to be around $3 million. His sources of income are from streaming platforms, brand deals, and being a social media influence.

At the moment, there are no traces of ArrDee’s family on the Internet. Riley said his family was “heavily into music” and he grew up listening to rock music from bands such as Bon Jovi, Guns N’ Roses, and AC/DC.

ArrDee’s coming up before fame

In an interview with The Argus, Riley said he “can’t remember a time” when he did not want to be a musician and would often take his Sony Walkman CD player to Hove Park School and show videos of himself rapping to his friends.

He said: “I had a little following in Brighton. I had around 8,000 followers doing Instagram freestyles and recording my own stuff and putting it online.

“At first, when I was in secondary school, I would share my music around there. As I started doing it more it started growing and people started seeing me on hashtag challenges and instrumental challenges.”

Riley said his family were “heavily into music” and he grew up listening to rock music from bands such as Bon Jovi, Guns N’ Roses and AC/DC.

While he moved away from becoming a rock musician, Riley said you can still hear its influence in the music he makes today.

He said: “That’s why you hear a lot of guitar melodies in my music, but from when I first heard Eminem, Lil Wayne and 50 Cent, I knew I was going to be a rapper.”

The rapper appeared on an episode of Amelia Dimoldenberg’s YouTube series Chicken Shop Date back in May of 2021. In the episode, Amelia left the usual setting of a London chicken shop and made the journey to Brighton – ArrDee’s term – where the pair fittingly ate fish and chips. The episode, of course, made for some enjoyably awkward viewing. Check it out below.