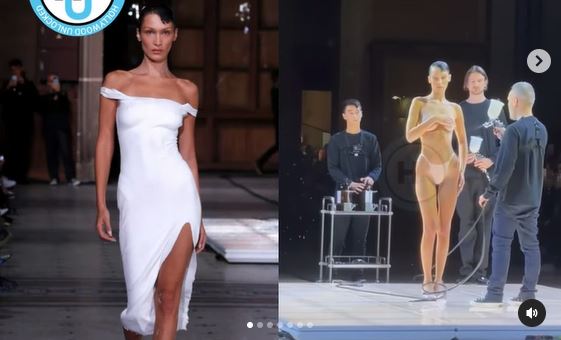 Bella Hadid Closing Coperni’s Spring Summer 2023: They Made A Dress Right On Stage On Her Nake Body.

During the grand finale of Coperni’s Spring Summer 2023 fashion show in Paris, France this Friday (September 30), model Bella Hadid stunned the crowd with her spray-on dress!

Several videos of Bella getting sprayed on are going viral and it makes sense because the idea is so creative and cool to watch.

Closing the show, Bella walked out in nude underwear and heels as she covered her breasts with her right hand.

As she stepped up onto a well-lit platform, several scientists began to spray her with a liquid that turned into a wearable dress.

Now, the spray-on technique was developed by Spanish fashion designer and scientist Manel Torres, via his company Fabrican.

It is reported that Fabrican liquid contains cotton or synthetic fibers suspended in a polymer solution that eventually evaporates once it comes into contact with the body.

To make it even cooler, after wearing it, it can later be removed and turned back into a solution, ready for reuse.