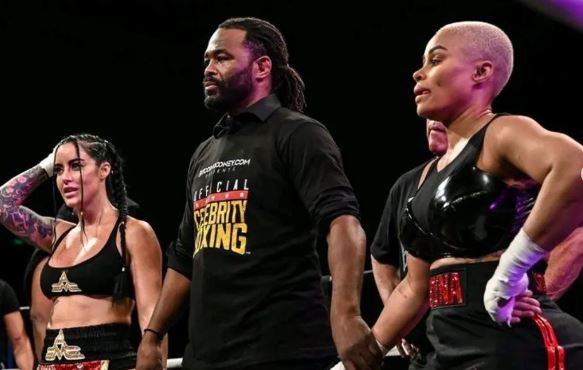 Blac Chyna and Alysia Magen fight ended leaving both the models unhappy about the results of their Celebrity Boxing Match, which ended in a draw. The results left both women calling “bullsh*t.”

The bout went down on Saturday night, with both women throwing many punches throughout the fight. Magen got in the night’s biggest hit, knocking the Rob & Chyna star to the ground.

The judges ruled the match a tie, much to Chyna’s and Magen’s dismay. Neither sounded like they were interested in a rematch anytime soon.

“Maybe they should check the scores again!” Chyna said of the judges’ decision.

Things were tense between the two before the match, and a lot of trash talking went down. Chyna reportedly lunged at Magen during the weigh-in after the model hurled a Kardashian-themed insult at the influencer.

“Hey, I’m not Kim Kardashian,” Magen said. “I’m going to knock you both out.” The dig was meant as a shot to Chyna and her trainer Tamara Frapasella-Fortune, who came out victorious over Kardashian at a 2010 charity boxing event.