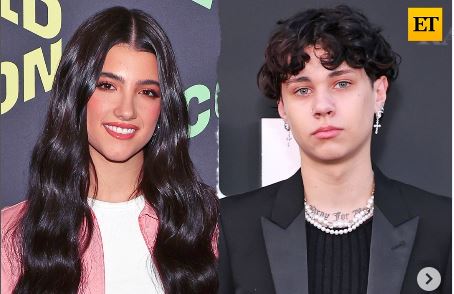 Are Charli D’Amelio and Landon Barker dating? The American singer and rapper is in a relationship with TikTok star Charli D’Amelio. Here’s how they met.

Charli D’Amelio is reportedly seeing Travis Barker‘s 18-year-old son, Landon Barker, possibly making him her new duet partner in her life. A source close to the celebrity told People Magazine that the duo is in the early stages of dating. They said: “They’re seeing each other, and it’s early stages.”

Fans have been speculating about a romance between D’Amelio and Barker ever since they were spotted together on multiple occasions. Most recently, the duo was seen leaving Barker’s concert together in the middle of June 2022.

However, representatives for the teen stars have not yet commented on the news.

EOnline describes their romance as “a clearly a 10—no ifs, and or buts. Indeed, earlier this month Charli and her older sister Dixie D’Amelio came out to support the model-turned-designer at the launch of his boohooMAN collection. “It was a big night for Landon,” an eyewitness at the June 14 event told E! News. “It was important to him that Charli was included.”

The two kept close throughout the evening, smiling and talking, according to the partygoer: “They were careful not to show too much PDA with so many eyes around.”

The 18-year-olds raised eyebrows when they both shared Instagram stories of new tattoos they got from the same Los Angeles-based artist, named Arbel (@ar.bel).

Apart from leaving Barker’s concert together in June this year, the two were also spotted leaving a party organised in Los Angeles to celebrate D’Amelio’s sister Dixie’s debut album, A Letter To Me.

The 18-year-old was seen out with his girlfriend in New York City on June 28, the day the Blink-182 drummer was rushed to a hospital. Clad head-to-toe in black, Landon held hands with the TikTok star, 18, as they left Machine Gun Kelly‘s after-party for their sold-out concert at Madison Square Garden.

Hours before the sighting, Landon had joined MGK onstage for a performance of their collaboration, “Die in California.”

So, is this a sign that Landon has fallen in love with the girl at the rock show? Not quite. A source close previously told E! News that the couple is “in the early stages of dating.”

However, that doesn’t mean they aren’t feeling this budding romance, either. After all, Charli and her older sister Dixie D’Amelio stepped out to support the model-turned-designer at the L.A. launch of his boohooMAN collection earlier this month. “It was a big night for Landon,” an eyewitness at the June 14 event told E! News. “It was important to him that Charli was included.”

This week, Travis was taken to Cedars-Sinai Medical Center in Los Angeles by ambulance as his wife, Kourtney Kardashian, stayed by his side. Though the Barkers have yet to publicly share details about the rocker’s condition, multiple sources connected to the family told TMZ that he’s suffering from pancreatitis—an inflammation of the pancreas that causes abdominal pain—likely triggered by a recent colonoscopy.

Amid Travis’ hospitalization, Landon’s younger sister, Alabama Barker, asked her Instagram followers to “send your prayers.” The 16-year-old also reiterated her plea in a since-deleted TikTok video that showed her holding Travis’ hand in what appeared to be a hospital room.

Travis’ medical emergency comes one month after he and Kourtney tied the knot in a lavish Italian wedding on May 22. The ceremony was attended by close friends and family members, including Travis’ kids, stepdaughter Atiana De La Hoya, 22, and Kourtney’s three children with ex Scott Disick: Mason, 12, Penelope, 9, and Reign, 7.

Recalling the nuptials, Landon recently told E! News’ Daily Pop that it was “a beautiful experience.”

“It was great to go out there and see my dad super happy with his new wife,” he shared. “It was honestly amazing.”

Who is Landon Asher Barker?

Landon Asher Barker is an American rapper, singer, musician, and social media personality with an inclination toward fashion.

Barker became popular on the MTV reality series Meet the Barkers, which aired between 2005 and 2006. The artist is loved as a drummer and a rapper and has over 1.2 million followers.

He was born to the Blink 182 drummer, Travis Barker, and his former partner Shanna Moakler, on October 9, 2003. He is 18 years old (as of 2021). The artist was raised in Santa Monica, California, United States.

He attended a private school in Santa Monica before being enrolled at Fontana High School, California. The influencer is reportedly interested in drama and took part in numerous school and social drama programs.

Barker appeared in a 2021 short film called Downfalls High, where he played the role of a drummer. The movie was directed by Mod Sun and Machine Gun Kelly.

He often uses the phrase OTG in front of his name, which is an acronym for On The Grind. The 18-year-old musician has released quite a few singles, key among them being Trust, Don’t Need Her, Skulls Misfits, and Holiday.

He has also worked with brands like Purple, Rick Owens, Fashion Nova Men, and Famous Stars and Straps.

According to newsunzip.com, Barker’s net worth is around $3 to $4 million.

Who else has Charli D’Amelio dated in the past?

Charli D’Amelio is a popular Gen Z influencer, who became famous from her TikTok videos.

She was previously connected to fellow TikTok star Chase Hudson (a.k.a. musician Lil Huddy). The two had started going out in December 2019 and separated in April 2020. The younger D’Amelio sister shared the news with her fans by writing:

“Since you guys have watched mine and Chase’s relationship from the start, I decided I needed to tell you all that we are no longer together, it hurts me to say this, but we’ve decided that this is what’s best for both of us.”

She clarified that the two were still friends by adding:

“We are still close friends and I would not change that for anything! I truly have so much love for Chase and wish him nothing but the best for him. It makes me happy to see all of the great things he has going for him.”

According to rumours, Hudson recently deleted a picture with Barker from his Instagram profile.

Many took this to be yet another sign of Charli D’Amelio and Landon Barker getting together.