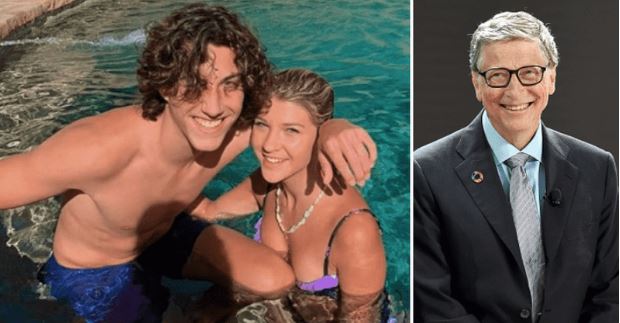 Bill Gates was seen in Manhattan after splitting with Melinda with Phoebe and her boyfriend. From the latest picture where Flynn was spotted with the Gates, it looks like he has Phoebe’s dad’s approval.

Phoebe Adele Gates is one of the children of Bill Gates and his ex-wife, Melinda French Gates. Bill and Melinda divorced last year, but the pair still share in the Gates family fortune. She is 19 years old (as of 2021) and was born on September 14, 2002. Her siblings include Jennifer Catherine Gates and Rory John Gates.

She is interested in becoming a professional dancer and a singer and shares an interest in the film industry because of her actor brother. In an interview with Vanity Fair, mommy Melinda described raising Phoebe with sound values as her most outstanding achievement.

Phoebe was an aspiring dancer and her parents enrolled her in the Professional Children’s School in New York City which is a college prep school for dancers, athletes, musicians, actors, and artists. She also studied at The School of American Ballet at the Lincoln Center for the Performing Arts, and Juilliard School.

Bill and Melinda’s kids attended their father’s alma mater, Seattle’s private Lakeside High School. She also studied at The School of American Ballet at the famed Lincoln Center for the Performing Arts, and the prestigious Juilliard School.

Phoebe Adele Gates is Bill’s youngest daughter. The 19-year-old is currently worth over $10 million. Though she has a lot of money, she is certainly not spoiled. She is believed to be the heir to one-third of the Gates family’s $130B fortune.

And she and her dad have a very special relationship.

Who is Phoebe Gates dating now?

Bill Gates’s last daughter real named Phoebe Adele Gates has found for herself a new boyfriend who is called Chaz Flynn. As you can imagine, Twitter is very intrigued by Phoebe’s choice due to her father’s fame and expensive divorce from his ex-wife Melinda.

Phoebe randomly releases pictures with this mystery man and their mannerism shows nothing but only depicts the two are in a relationship.

On her Instagram account, Phoebe posted a picture on Flynn’s birthday, titled, “Happy birthday my love.” In the picture, Phoebe was seen kissing Flynn while enjoying a pool date in blue swimwear.

Also, Bill Gates was spotted for the first time after his divorce from ex-wife Melinda Gates on Saturday, May 22. The millionaire was seen in Manhattan with his teenage daughter Phoebe Adele Gates and her boyfriend. He was spotted heading to Nobu in Manhattan. The Microsoft founder, 65, was dressed in casual attire, in a polo shirt, and black pants, with a jersey wrapped around his waist and a mask dangling from his wrist. He was still sporting his wedding ring prominently on his left hand.

The Microsoft founder was earlier spotted after flying into Newark Airport in New Jersey with Phoebe, 18, and her boyfriend Chaz Flynn. At the airport, the trio was also joined by a woman dressed in dark office wear, carrying a large briefcase, and a white-haired man in glasses, a check shirt, and a bodywarmer. See the pictures of their outing here.

Gates hasn’t been seen in public since he and Melinda announced their split back on May 3, other than to appear at a virtual event with the US Chamber of Commerce on May 20. The 65-year-old was also seen sporting his wedding band during that appearance.  As soon as the Internet saw Bill and his daughter’s latest pictures, they wanted to know more about Flynn, his daughter’s boyfriend.

Who else has Phoebe Gates dated?

Recently, Phoebe was also in the news after sharing cozy pictures with a black man. In one of the pictures, Phoebe was getting a peck from her new man and while sharing it on social media, she added the love emoji. See the pictures here.

The name and biographical facts about this black man are not known yet.

Who is Chaz Flynn?

Chaz Flynn is a YouTuber who is widely known as the boyfriend of Bill Gates’ daughter, Phoebe Gates. Bill Gates was first seen following his divorce from his ex-wife Melinda Gates on Saturday, May 22 in Manhattan with his teenage daughter Phoebe Gates and Flynn. He was seen heading to Nobu in Manhattan.

Bill was dressed casually, with a polo shirt, black pants, a T-shirt wrapped around his waist, and a mask hanging from his wrist.

He still wore his wedding ring prominently on his left hand.

Meanwhile, his Linkedin account doesn’t reveal much information about him.

Speaking of his net worth and how much he is worth, Chaz Flynn has an estimated net worth of $500K to $1 million.

How old is Chaz Flynn?

How did Chaz Flynn meet Phoebe Gates and how long have they been together?

According to Phoebe’s Instagram account, the couple started dating somewhere in 2019 and they are still going strong. Although Phoebe keeps her romantic life private and no one knows much about her boyfriend, she continues to give clues on social media about her beautiful love life.

Phoebe Gates and Flynn are frequently seen traveling to different places and Phoebe even admitted that traveling is one of the things she missed the most during the pandemic. Also, from the last image, Flynn was seen with the Gates, he looks like he has Bill’s approval.

Phoebe often posts photos of them on social media and subtly shows her love. On her Instagram account, Phoebe posted a photo on Flynn’s birthday, titled “Happy Birthday my love.” In the picture, Phoebe is seen kissing Flynn as she enjoys a date by the pool in a blue bathing suit.

Bill and Melinda Gates, announced their divorce after 27 years of marriage. A joint statement revealing their split to the world said they “no longer believe we can grow together as a couple in this next phase of our lives.” Melinda said in court documents filed May 3 that their union was “irretrievably broken,” though she and Bill have said they will still work together at the Bill and Melinda Gates Foundation, which they launched in 2000. Following the announcement of the split, reports detailing Bill’s life and his alleged relationships while he was married to Melinda have come to light, making it quite difficult for the family going through the divorce.